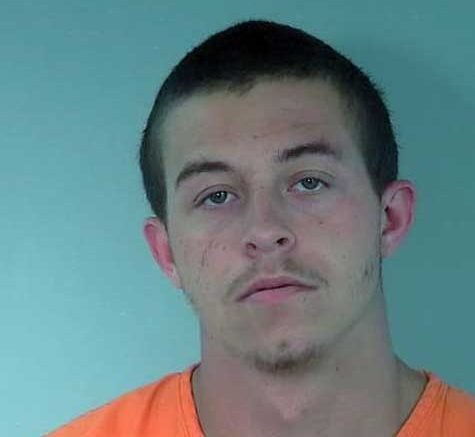 Contributed Photo/Courtesy GCSO: Kirby Shane Herrick Jr., 18, was booked into jail on a litany of charges Sunday morning after striking a deputy with a car Friday night.

GRAHAM COUNTY – A man who was wanted on a bevy of charges after striking a Sheriff’s deputy with his car and fleeing from crash scenes was booked into the Graham County Jail on Sunday morning after turning himself into his bail bondsman.

After spending two nights out on the lam, Kirby Shane Herrick Jr., 18, was booked on two charges of unlawful flight from law enforcement, two charges of aggravated assault on a police officer, two charges of aggravated assault, reckless driving, aggressive driving, endangerment, excessive speed, criminal damage and failure to stop at the scene of an accident with injury. Herrick was turned over to a deputy by Bill Daniels of Triple B Bail Bonds. Herrick previously was picked up on a warrant March 5 pertaining to charges of possession of a dangerous drug (methamphetamine), possession of drug paraphernalia and possession of marijuana. He posted a $5,000 bond March 10 and was released from jail. He was also previously found guilty in December 2016 of assault, disorderly conduct and criminal damage and was sentenced to probation.

His most recent trouble began Friday night at about 7:12 p.m. when deputy Steven Mingura pulled Herrick over for a traffic infraction. Deputy Mingura wrote in his report that he witnessed Herrick in a blue, four-door Buick driving erratically westbound on the shoulder of E. Solomon Road and nearly strike a vehicle at the intersection with U.S. Highway 191. Herrick then headed southbound on U.S. Highway 191 and Mingura pulled him over at Morris Street.

Mingura wrote that as he approached the vehicle he could see Herrick was obviously under the influence of some sort of stimulant. Mingura reported that he ordered Herrick out of the vehicle but that Herrick refused to comply and struck him with his hand and pulled away. At that time, Herrick then took off in the car, striking Mingura in his elbow. Mingura wrote that he had to push off the vehicle as Herrick turned the car toward him to avoid being hit further. Mingura was later treated at Mt. Graham Regional Medical Center (MGRMC) and released with an abrasion to his right elbow.

After the incident, Mingura pursued Herrick southbound on U.S. Highway 191 in excess of 90 mph. Herrick, who does not have a driver’s license, would later advise that he hit 117 mph during his escape.

Mingura reported witnessing Herrick nearly collide with multiple vehicles and then lost sight of him as he swerved in and out of traffic. Another deputy caught sight of Herrick near the Family Dollar store and continued the pursuit but he too lost him as Herrick erratically drove away.

At about 7:17 p.m., however, County Dispatch alerted that Herrick’s car had struck another vehicle parked at a residence at Yavapai Drive and then crashed into the desert off Kiva Drive, roughly seven miles south of Safford. The closest cross streets are U.S. Highway 191 and Highway 366 (Swift Trail). The parked car had a man and woman inside, and the woman was taken to MGRMC, where she was treated and released. The crash investigation is being handled by the Arizona Department of Public Safety.

The Buick was found having flipped over into the desert off Kiva Drive, but Herrick was nowhere to be seen. On Sunday, Herrick said he climbed on top of a partially built shed after the crash and saw the emergency lights headed toward his way, At that point, he ran to his mother’s residence on Cactus Street and hid out until turning himself in, according to a Graham County Sheriff’s Office report.

Herrick said he had drank a 40 oz. bottle of King Cobra before driving but denied being on any drugs. He said he “punched” the gas when the deputy tried to take him out of the car and that he didn’t stop because he felt threatened by the deputies. He suffered some scratches on his arms and legs from running through mesquite trees and a barbed wire fence in his escape, but otherwise was in good condition. After his interview, he was booked into the jail without further incident.

Police searching for suspect who tried to run over deputy