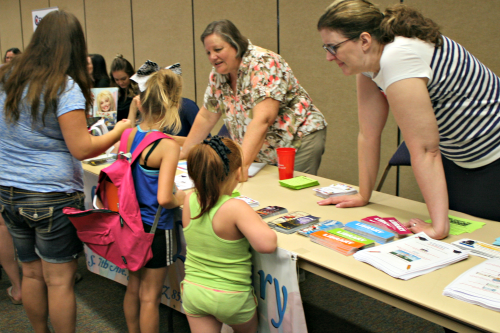 THATCHER – Students will soon be back in school, and the community has banded together to make the transition that much easier.

For its fifth year, the Back-to-School Resource Fair will be working with various groups and businesses within the Gila Valley to help local school-age children get ready for their first day of classes. The fair will be held Saturday, July 22 from 9 a.m. to 12 p.m. at Eastern Arizona College.

The Graham County United Way is sponsoring the event through the Graham County Substance Abuse Coalition (GCSAC), and as with every year, will be partnering with multiple agencies and businesses within the Gila Valley. Roughly 500 backpacks will be given away to the first students who are able to collect them, and free eye screenings will be performed by the Safford Lions Club. Sports physicals will be given for $20 each, and free vaccinations will be available as long as the parents bring their children’s vaccine records. 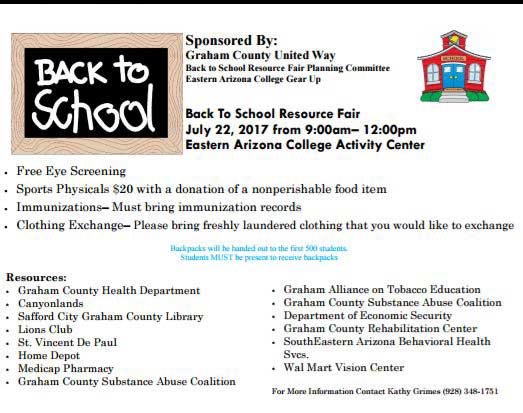 GCSAC DirectorKathy Grimes told Gila Valley Central that she appreciates the community which is so ready to gather and support each other.

“I think that it’s just awesome that we have such a close nit community,” Grimes said. “(It’s) a community that everybody, when they hear that the back to school resource fair is coming, contributes and helps our kids get back into school.”

Aside from the backpacks and school supplies, the Graham County Rehabilitation Center Thrift Store and Saint Vincent De Paul will organize a clothing exchange for the event.  GCRC Thrift Store managerBetsy Hawkins told Gila Vally Central that they bring appropriate clothing for the students.

“We usually bring clothing, kids clothing that they could use,” Hawkins said. “And we encourage people to bring in clean, gently used clothes so that we can exchange them.”

Although the fair is usually scheduled for the first weekend in August, this year it has been moved up to accommodate those schools that start soon. Last year, the line to enter the resource fair was around the block and individuals began lining up an hour ahead of time. If anyone attending is planning on doing this, Gila Valley Central advises wearing sunscreen and bringing bottles of water.

The resource fair will be Saturday, July 22 at Eastern Arizona College. Doors will open 9 a.m., and the fair will end at noon.