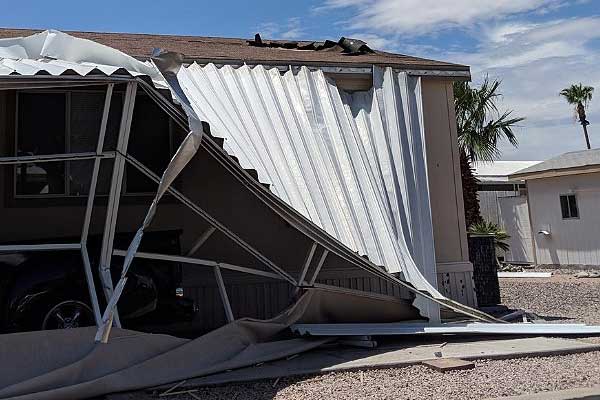 Arizona’s monsoon season officially begins on June 15, and ends on Sept. 30. The storms peak between mid-July and mid-August and, on average, about half of Arizona receives nearly fifty percent of its annual rainfall during the monsoon season. These storms can be violent and cause damage to residential and commercial property.

In addition to monsoon storms, wildfires pose another threat to some homeowners. The risk for fires is highest during the early summer but, due to Arizona’s dry climate, the threat remains year round.

When disasters strike, there are individuals looking to take advantage of unsuspecting homeowners.

To avoid falling prey to a second disaster, damaged homeowners should only hire licensed contracting professionals to work on their property.

If a problem occurs when using a licensed contractor, a residential property owner has significant protections not available to persons hiring an unlicensed entity. Among them is the ability to file a complaint against the contractor’s license within a two-year period from the date of occupancy or date the last work was performed. This is the Agency’s jurisdiction period if the workmanship is below standard or is in violation of existing codes.

Under certain conditions, a homeowner may also be eligible to apply to the Registrar’s Residential Contractors’ Recovery Fund and, depending on the cost of damages, receive up to $30,000 to have the work corrected or completed.

When getting estimates or choosing a contractor for a project, always ask if the contractor is licensed and check the license number using the contractor search at www.roc.az.gov, or by giving the Agency a call at 1-877-692-9762 (1-877-MY-AZROC).