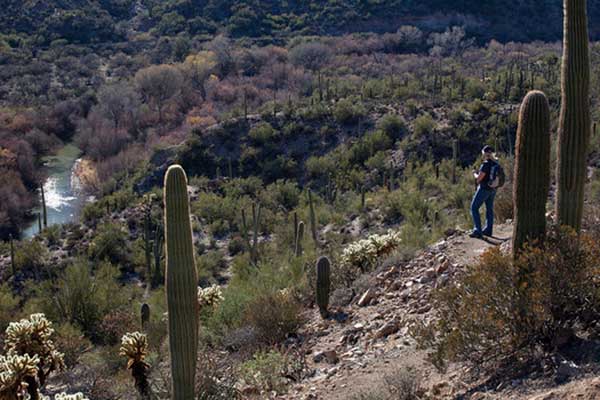 The Arizona National Scenic Trail is just one of many projects supported by the Land and Water Conservation Fund dollars.

Ariz. – A federal fund that helps protect national parks, wildlife refuges, and other public spaces around the country is set to expire 100 days from Friday. Arizona business owners, outdoor enthusiasts and lawmakers are asking Congress to renew the program.

For more than 50 years, the Land and Water Conservation Fund has used revenue from offshore drilling to support public land and water resources at no cost to taxpayers. Mark Tercek – president and CEO of The Nature Conservancy – says the fishing, hunting, and other outdoor recreation opportunities the fund supports bring billions to the economy each year.

“This is too important to leave its future in doubt,” says Tercek. “We’re here to say now is the time to get LWCF the permanent authorization and full funding it deserves.”

The fund will expire in September unless Congress renews it. Arizona Congressman Raul Grijalva, D-Tucson, says the fund should be considered a “straightforward investment in the future of our country.”

He’s among a bipartisan group of lawmakers sponsoring a bill to reauthorize the fund. This week, they helped kick off a 100 day campaign to save it.

According to the Land and Water Conservation Fund Coalition, $228 million LWCF dollars have been invested in Arizona, from national parks to community playgrounds. Ben Brophy manages the large Babacomari ranch in southern part of the state and he is the board vice-president, for the Arizona Land and Water Trust.

“The more we can work to keep those open and connected for the benefit of people and wildlife, the better we are 50 years from now,” says Brophy. “And funds to do that are limited.”

In most years, Congress raids some of the Land and Water Conservation Fund income to spend on other priorities. The current push is not only to reauthorize the program, but to fully fund it.