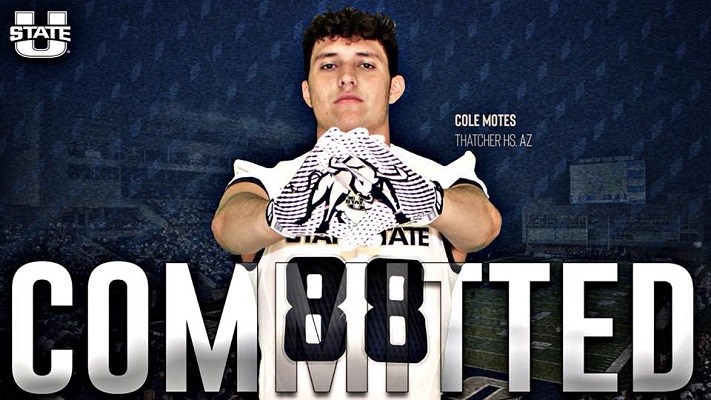 Thatcher Tight End Cole Motes has made it clear that he is committed to the Utah State Aggies football program. He announced his commitment on Twitter yesterday.

“First, I would like to thank my parents, family and friends for all they have done for me along this amazing journey. Without them none of this would ever be possible. Second I’d like to thank all of my high school coaches along with Coach (David) Yost and Coach Wells for finding and believing in me. Most importantly I’m thankful for the opportunity to still go and serve my 2 year LDS Mission! With that being said, after much thought and prayer, I have decided 110% to commit to Utah State University!”

The 6’6″ 235 pound Motes will be the first Thatcher Eagle football player to go from Thatcher straight to a Division 1 football program since current Head Coach Sean Hinton went to Arizona State University in 2002.

“Cole is an outstanding athlete and has the size and speed to compete at the next level,” said his current Head Coach Sean Hinton. “They love 3 sport athletes and he(Cole) is a beast in all three he plays.” Motes is a starter on the Eagle basketball team and a member of the track team as well.