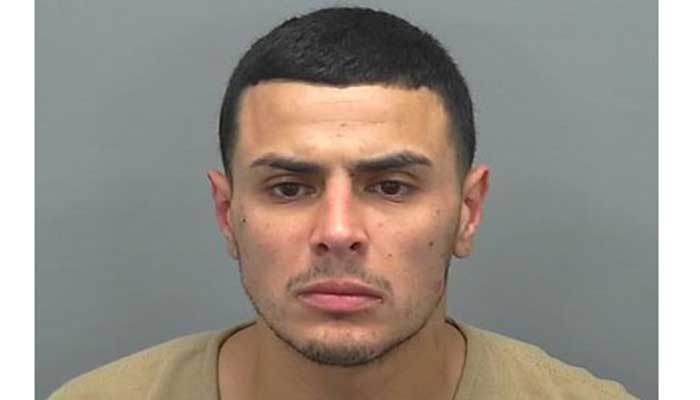 When an officer approached the two people outside, the female claimed that she lived there and the male said he was there to fix the screen to the window. While the woman continued to tell the police that her Aunt who owned the home was in the hospital but knew she would be there, the investigator noticed the door to the home was ajar and there was the smell of burnt marijuana in the immediate area. It appeared to the officer the residence may have been broken into.

In the meantime, another officer had contacted the owner of the home and was informed that no one should be at the residence. When officers entered the home, the male inside identified as Eduardo Pena, was found hiding in a back room.  During his arrest, a marijuana cigarette was located in plain view. A local outstanding misdemeanor warrant was discovered for Pena.

The male outside told police that the owner and Pena were his cousins, and that he was called to fix the window screen. He said he didn’t have anything to do with breaking into the residence and said he could also smell marijuana but he didn’t have anything to do with it. When asked if he had any weapons or drugs on him, he said that he did not as he touched his belt area. When he was asked again, he again replied, “no” while touching his belt area. The officer asked if he could pat him down for weapons or drugs and was told no, that he didn’t have any reason to. The investigator informed him that because illegal drugs were found in the area and the burglary which had occurred just prior to the officers arrival, he was going to pat search him. The officer instructed him to keep his hands away from his belt area, however, when the officer began to pat search him, the man frantically began digging in his left pocket. Another officer assisted to help control the man’s arms, during which he began yelling “ it’s just a pipe.”

A full pat search was done at that point and no pipe was located. However, a usable quantity of meth was located in his small coin pocket. The meth was found wrapped inside what appeared to be a drinking straw wrapper. It later tested positive for meth.

Pena was transported to the Graham jail and booked in for his warrant. Charges are pending for the other two individuals at the scene.