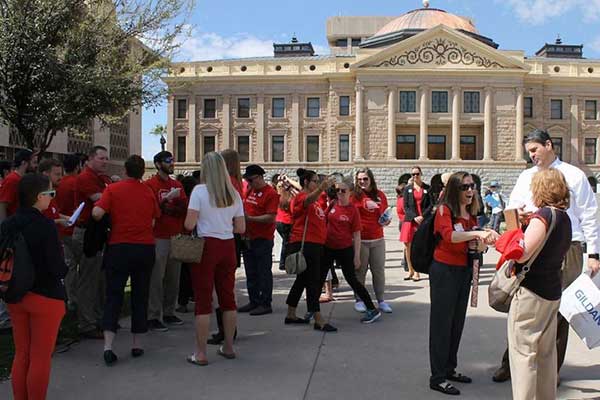 Phoenix – Arizona teachers say they will end their strike and return to work if lawmakers approve a proposed budget deal, even though the measure does not meet all their demands. It’s possible that the governor could sign legislation today. The legislature is expected to pass the measure today. The budget deals does not meet teachers’ demand for $1 billion in new education funding but it does provide increased pay and additional education funding.

We are very close to passing a very significant budget investment into K-12 education, and I want to update you on where things stand.

On Friday, along with the Senate President and the Speaker of the House, I announced a joint budget agreement that included a major increase in funding for public education.

This budget was very much influenced and shaped by our school leaders. On April 10, I met with a group of superintendents representing students from across the state specifically to talk about the impact a strike would have on their schools and communities.

During that meeting, they described the challenges of recruiting and retaining staff, and at the same time, managing all of the remaining needs in their schools. During the discussion, they asked me to work with them on a plan we can all champion.

The next day, on April 11, the Finance Advisory Committee, consisting of independent economists, recognized that revenues through March were $262 million above forecast and included significant increases in ongoing revenues available to the state over the next several years. This report confirmed news released on April 9 from the nonpartisan Congressional Budget Office announcing a 75 percent upward revision to growth forecasts for the national economy over the next two years. With that improved outlook, Arizona could realize over $1.5 billion in additional revenues over the next five years.

I challenged my staff – let’s think big and put forward a plan that addresses these pressing issues.

On April 12, we announced our plan for a 20 percent raise by school year 2020 – at a press conference with members of the Legislature, school leaders and education advocates.

Since then, I have met with teachers from around the state, and my team has been working closely with education organizations to fine-tune this plan. The meetings with teachers were incredibly valuable, as our conversations only reaffirmed my commitment to getting this plan across the finish line. Their feedback also has improved the final product that is now before the Legislature.

The budget deal we announced last Friday funds a 20 percent increase in teacher salaries by school year 2020. This is the plan that I proposed on April 12, 2018. These resources are permanent, ongoing, and inflated – and to ensure that this commitment is made, we are including these dollars in the “base” formula.

The need for increased investment in our schools extends beyond our teachers though, and the importance of a well-funded public education system, cannot be overstated. The budget agreement also fully funds a restoration of Additional District/Charter Assistance as I originally proposed on January 9, 2018. This investment will be phased in over five years, including $100 million in FY 2019. By FY 2023, that number goes up to $371 million — ongoing. While traditionally used for capital needs, school leaders will now have flexible dollars to update curriculum, improve school facilities and increase support staff pay. Many have been paying for capital needs with operational dollars, so this plan frees up those dollars for other uses.

The budget also includes other important K-12 education investments, including $1.8 million to fund career and technical education, $10 million for behavioral health specialists, $53 million for building renewal to improve school infrastructure – the highest funding level since 2007 – and $88 million for construction of five new schools.

I also want to address the sustainability of this plan. As mentioned above, leading economists in Arizona and around the country agree that our state is showing momentum in key metrics like job growth (top nine in the nation), population increases (top six), and corresponding income gains (top three). As a result, our state’s revenues are increasing. Economists at Moody’s, the Seidman Research Institute, the W.P. Carey School of Business at Arizona State University and the Eller School of Management at the University of Arizona have validated these forecasts.

Our plan directs this revenue to our biggest budget priority: public education, and it does it in a way that is responsible, sustainable and solidifies our commitment for years to come.  Even after all of the investments included in this plan and the overall state budget, we maintain a structural balance in each of the next three fiscal years. Additionally, our rainy day fund is at its fullest – $467 million – along with historic levels of cash balances ($240 million in FY 2019). That’s unheard of.

Our budget agreement does NOT compromise essential state services to accommodate our teacher pay package. This was something that was very important to the teachers I met with.

On Monday, the Legislature announced the first step to getting this budget deal done. At the first opportunity, the budget bills were introduced through an expedited process. The Legislature is constitutionally required to “read” a bill during open session over a three day period. Today, they did the “first read” and also announced that their Appropriations Committees would meet tomorrow. After which both the House and the Senate will process the bills simultaneously so that they may be expedited for my signature. As soon as they arrive on my desk, I am committed to signing them quickly. We are optimistic about this happening as early as Wednesday. Please continue to watch the progress on azleg.gov – all of the public meetings are streamed and your communities can weigh in through the Request to Speak system.

The 20 by 2020 plan is our latest effort in prioritizing K-12 education. In 2016, we passed Proposition 123, providing $3.5 billion over 10 years. This January, we announced in collaboration with school superintendents the Restoration of Additional District/Charter Assistance. And in March, we passed the 20-year bipartisan extension of Proposition 301 to provide stable school funding resources.

I have included a presentation that summarizes our revenue methodologies, the totality of the education package for K-12 and higher education and other investments in healthcare, social services, county funding and other key essential government services.

Here is my guarantee to you: I will never check the box on public education. This is one of the state’s most important responsibilities, along with public safety and child safety. Our teachers do amazing work, and are truly difference-makers in the lives of our children. I’ve been incredibly impressed by them, and I am grateful for their dedication to providing every child a quality educational experience.

They have earned this raise. Now, it’s time for us to deliver.