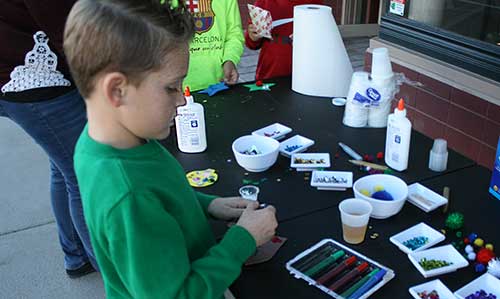 Brooke Curley Photo/Gila Valley Central: Dawson Brown creates his own Christmas ornament while he waits for his turn with Santa.

SAFFORD – The line for Santa was long, but Jenny Howard came to the rescue with homemade ornaments and hot chocolate.

Santa Claus made an impromtu stop in Downtown Safford on Saturday afternoon to hear the desires of all the good little boys and girls. Waiting in line is no fun, however, so Howard devised a plan to keep the children’s attention while allowing the parents to slosh through the line.

Howard, the owner of Ginaveve’s Market Place and Gourmet Olive Oils & Balsamics on Main Street, decided to set up a craft table and teach children how to make homemade ornaments while waiting to see the jolly old elf. The table was full of sparkles, paint and glue.

“We wanted to do it the old fashion way because Christmas is all about kids,” Howard said. “It’s is more fun for them to express themselves, it’s also good so they can bide their time until Santa got here.”

The ornament table was set up for roughly  the entire time there was a line for Santa. 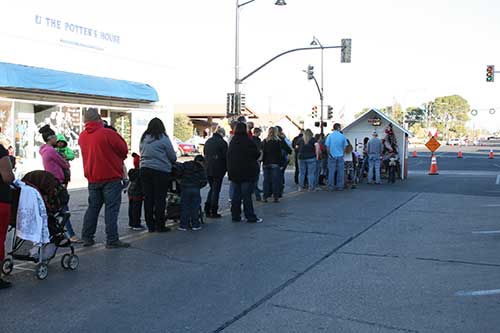 Christmas Ornaments in the 1900’s

The mid-1960s saw another major change. The world was changing, and modernist ideas were everywhere. Silver aluminum artificial trees were so popular they were imported from America throughout the world. Colored lights placed below the tree made decorations unnecessary.

In the 1970s, America made a return to Victorian nostalgia, and the trees had a refreshing new look. Some American companies specialized in making antique replicas but others found the original makers in Europe to recreate wonderful glass ornaments and real silver tinsels.

In the 1990s, “theme trees” gained popularity. For example, popular Christmas ornaments helped complete the decorations for the “Starry Night Tree”, the “Twilight Tree”, and even pop-culture trees.

In the 2000s, personalized ornaments lead in popularity.