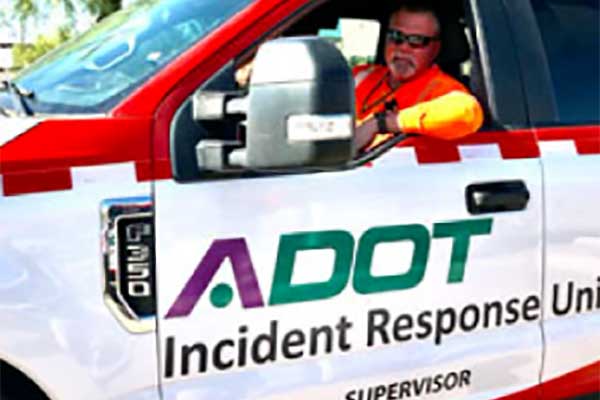 From fender benders to major collisions, crash responders are there to assist those involved and help clear the road as quickly as possible for other commuters.

In recognition of these roadside heroes, Governor Doug Ducey has proclaimed this week (Nov. 14-18) as Crash Responder Safety Week in Arizona. The Arizona Department of Transportation and the Department of Public Safety join in recognizing the job crash responders perform and how to help them stay safe.

Arizona saw an average of nearly 333 crashes per day last year on all roads both local and state. Many of those were attended to by emergency responders which include law enforcement, firefighters, medical personnel and tow truck drivers. While each of these responders has a different job to do, all are practicing what’s known as traffic incident management.

“Traffic incident management is the coordinated practices, responsibilities and cooperation of all of the different crash responders at the scene of a crash,” said Derek Arnson, ADOT’s Traffic Management Group manager. “These coordinated efforts help keep crash victims and emergency responders safe while working to clear the crash scene.”

In 2017, ADOT and the Department of Public Safety launched the Arizona Traffic Incident Management website – tim.az.gov – with the goal of being the go-to resource for Arizona TIM responder training. Since the website’s inception, Arizona has held 438 training sessions resulting in 8,743 crash responders being trained as of the end of August.

If you are in a minor crash and your vehicle is still operable, pull out of the travel lanes onto the side of the road or freeway. This clears the travel lanes for traffic to continue moving through, reducing the chance of a secondary collision.

If you are in the travel lanes and come upon vehicles on the shoulder of the road, move over one lane to give them space and give space to crash responders on scene to do their jobs. If it’s not possible to move over, slow way down as you pass by to help keep them safe.

“Through TIM training and driver awareness, we can help keep crash responders safe and able to go home to their families each night,” Arnson said.