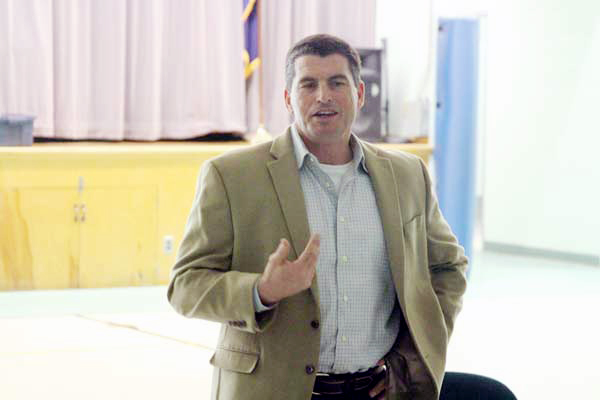 Bryant Ambelang, executive chairman of NatureSweet, talks about the future of his company's Bonita operation with residents at a community meeting at Bonita School on March 25. - David Bell Photo/Gila Valley Central

BONITA — The executive chairman of NatureSweet wants to clear up some confusion — his company is financially sound and in no danger of closure due to bankruptcy.

However, he offers no such assurances about keeping the greenhouses open in Bonita.

In an April 2 letter to Jonathan Truschke, the Bonita school superintendent, Bryant Ambelang explained that the Bonita operation continues to lose money and the only way he can see keeping it in operation is to sell off one of the six sites to Bayacan for a medical-grade cannabis grow.

Without that sale, he explained, NatureSweet’s Bonita operation would likely close down. However, property taxes would continue to be paid, just at a significantly lower amount due to the property being vacated rather than operational.

He said that would prevent the state from coming in and making up that funding for the school district, as would happen under closure due to bankruptcy, when property taxes are no longer being paid.

NatureSweet and Bayacan are seeking county approval for a zoning change that would allow the cannabis grow in Site Six of the facility. However, that request met with resistance from the county’s Planning and Zoning Commission, which recommended denial last fall.

Bayacan withdrew its rezoning request when it appeared the Board of Supervisors would also vote to reject the request, based on opposition from neighboring property owners.

NatureSweet and Bayacan have not put forward a timetable when that rezoning request might be resubmitted.