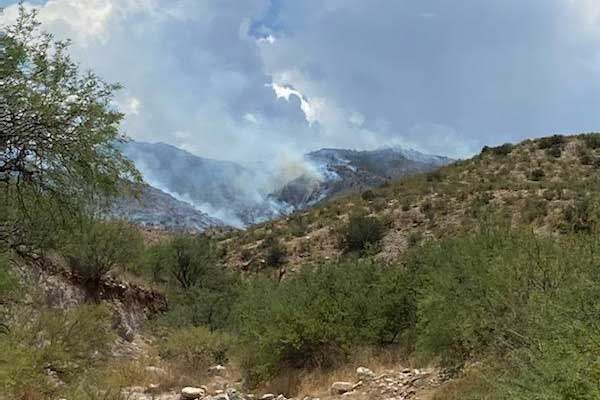 The Jackson Fire produced little smoke Friday after soaking rain occurred over night Thursday. By Friday morning the fire line was dormant and remained so until one small smoke appeared from a rocky outcrop Friday afternoon. Crews worked to further secure the perimeter on the north west segment and began suppression repair. Monday morning, fire managers declared containment to have reached 90 %.

Black Rock Road fire line construction residue was shredded and scattered and refuse and equipment removed from that area. Further suppression repair will be accomplished in the coming days as remaining resources will be assigned to patrol, monitor, and conduct suppression repair around the entire Jackson fire perimeter.

The Horse fire, on BLM land north of Aravaipa Canyon, grew to 228 acres by the time fire crews arrived Thursday afternoon to begin suppression. Aided by aerial retardant and water drops, the fire’s forward movement was stopped by evening when nighttime thunderstorms drenched the fire. Resources remained at the fire through the night and by Friday morning had achieved 50% containment. An element of rappelers remained throughout the day Friday before being removed by the end of the day. Resources will monitor the remote fire scar over the next several days to insure it remains secure. Today many resources are being reassigned to other incidents or returned to their home units to repair and replace materials, rest, and prepare for their next assignments.

This will be the final news release for these fires unless unanticipated developments require additional communication.

Incident Commander Darrell Howell offers his sincere thanks to all who were cooperators or stake holders on this incident for their assistance, willingness to share resources, and allowing his team to manage this incident. Your hospitality towards the entire team made it much easier to handle suppression of these two lightning ignited fires.

Temporary Flight Restrictions: A temporaryflight restriction has been placed over both the Jackson and Horse fire areas.