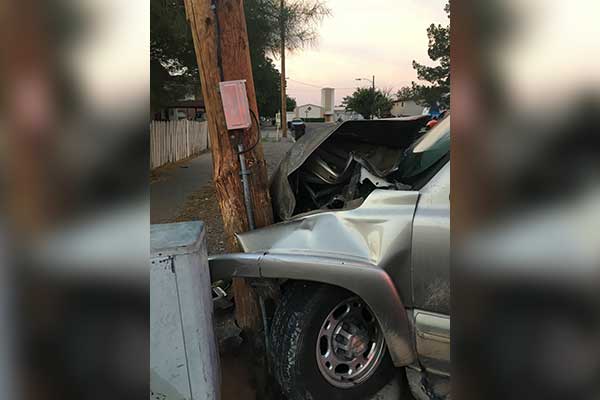 SAFFORD – On August 20th, police were called to 13th Street and Central Avenue around 5:30 am due to a single vehicle accident where the driver had left the scene. Authorities checked the area but were unable to locate the driver. The officers could see that a truck had hit a telephone pole, and both the pole and the truck were heavily damaged.

The officer then spoke with the neighbor, who stated that he was in his driveway when he heard the crash. He walked out and saw a white male in the street yelling, and the witness told the male that he was going to call the police. The witness reported that the driver then took off running. The witness said that he thought the male driver was on drugs because he was jumping up and down in the street and could not stand still.

Police were having difficulty locating an address for the registered owner of the truck. However, one of the officers remembered authorities had made contact recently with the owner at a residence on Central Avenue.

One of the officers went to the residence and found a man sitting outside near the area. The officer asked if he knew the person who they were looking for, but the man stated he did not. While speaking with the man, the officer got an emergency call and had to leave.  Later the officer was able to speak with the owner of the truck. She reported that she had left the keys in the truck but does not drive it because she does not have a drivers license. The officer inquired about the woman’s boyfriend, identified as Wesley Relitz, who reportedly lives with her. The woman stated that Relitz was not there and was working out of town. She insisted that someone must have stolen the truck. When another officer arrived, the woman signed a stolen vehicle affidavit and stated she would aid in prosecution if the police found who stole the truck.

As authorities continued their investigation, a witness came forward and confirmed that the driver of the vehicle was Wesley Relitz and that he was in the apartment of the woman police had been questioning. The officers went back to the residence where the woman continued to state the only people inside were her children and roommates. As police continued to question her, she finally admitted that Relitz was at the residence and went to get him.

A short time later, Relitz came out of one of the bedrooms. Relitz reported to the officer he was making a left hand turn when a dog went in front of him and he swerved to miss the dog and hit the pole. He stated he freaked out and panicked because he’s never done anything like this before and he knew it was bad. While Relitz was speaking, the officer felt he was under the influence of meth, but Relitz continued to deny it, saying that “it was beside the point.” According to the police report, Relitz exhibited the behavior of someone on meth. He would not look at the officers. He could not stop moving and/or twitching. At times he slurred his words, making it difficult to understand what he was saying.

When asked when he had last used meth, Relitz reportedly said that he had just woke up. He claimed that he had not used drugs that day. He said he panicked because he did not have a drivers license.

Relitz was arrested at approximately 7:30 AM for leaving the scene of an accident, criminal damage, and DUI/drugs. The woman who owned the vehicle was advised that she may be facing charges for filing a false report regarding the theft of her vehicle. Relitz was transported to the Safford police station. When asked about the events that led to the collision with the power pole, Relitz said that he had gone to a friend’s house and was taking the car back so that he wasn’t “out and about.” He said that his friends were behind him but stopped off at a convenience store. He told authorities that a German Shepherd ran out in front of him and that he swerved to miss the dog. When he hit the power pole, he said his reaction was to walk away. While telling his story, he reportedly could not form complete sentences and it was difficult to make sense of his explanation.

When asked about using meth, he said that it was beside the point and that he was not going to talk about it. Relitz repeatedly refused to have his blood drawn, claiming that there was no reason for it. Authorities obtained a warrant, and conducted a blood draw.  After the blood draw, Relitz admitted he would test positive for meth use, because he had smoked it the night before.

Charges are pending the results of the blood draw.