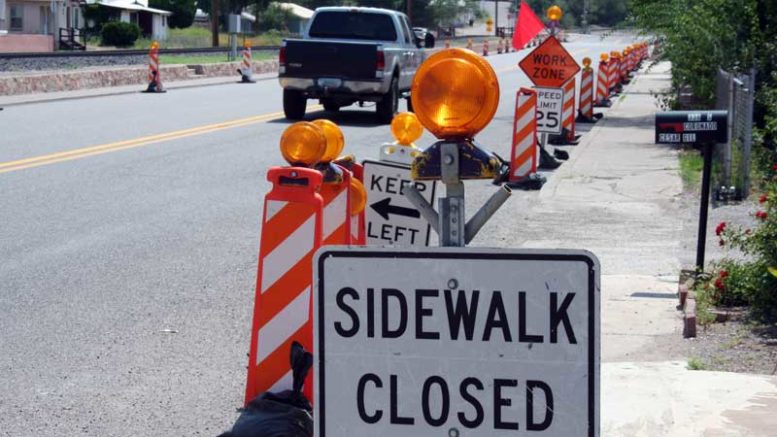 Photo By Gualterio Casias: A sign tells the public that a section of sidewalk is closed along U.S. Highway 191 in South Clifton. Sidewalks are being removed as part of an ADOT drainage improvement project that will run through late January 2018. Work will include a section of highway near the Clifton Train Depot.

Motorists urged to use caution through work zone

CLIFTON – Large sections of the sidewalks on one side of U.S. Highway 191  in South Clifton are gone and what remains of them are also being removed. There are orange and white vertical barriers directing traffic through two narrow lanes. The flow of traffic is slow but remains otherwise impeded.

Removal of the sidewalks involves a major Arizona Department of Transportation (ADOT) project to improve drainage and eliminate three large pools of water that remain on the road after heavy rain storms. 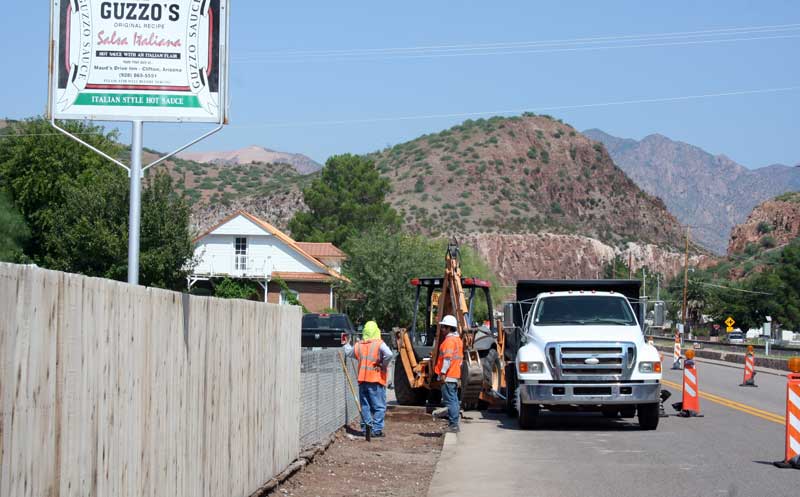 Photo By Gualterio Casias: Work crews remove a section of sidewalk in from of a business in South Clifton as part of a drainage improvement project on U.S. 191. ADOT is removing sidewalks along a half-mile stretch, from milepost 163 to the Coronado Bridge, which spans the San Francisco River.

The project began in late August and is scheduled to run through late January. Work will reportedly include a section of the highway, known locally as Coronado Boulevard, near the Clifton Train Station where the largest pooling occurs. 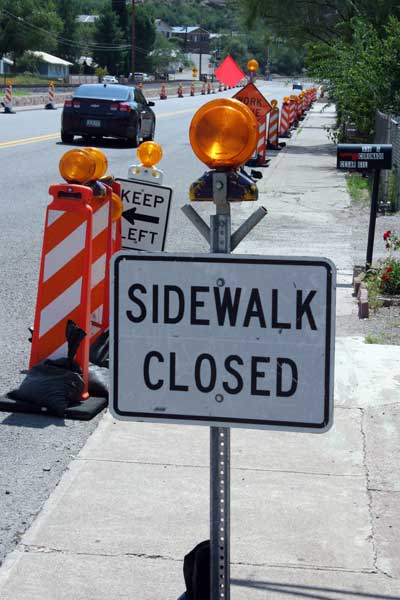 Cost of the overall project was not immediately available from ADOT.

The South Clifton work runs about a half mile from milepost 136 to the Coronado Bridge. There are three particular spots where rainwater pools: in front of The Liquor Store, PJ’s Restaurant and the former Tyler’s Taste of Texas.

As vehicles pass through the pools they splash water onto vehicles traveling in the opposite direction and the water can cover the windshield of the opposite moving vehicles, at times temporarily blinding those drivers. The situation can become particularly hazardous when a vehicle with high clearance – a large pickup truck or an even larger vehicle such as a semi- tractor trailer – passes through a pool and splashes water on to a much smaller passenger vehicle.

The speed limit through South Clifton is 25 miles per hour. Smaller vehicles tend to slow down when passing through a pool, but the larger vehicles having higher clearance, do not slow up and even at only 25 mph create enough of a splash to create a visibility hazard for drivers of smaller vehicles. 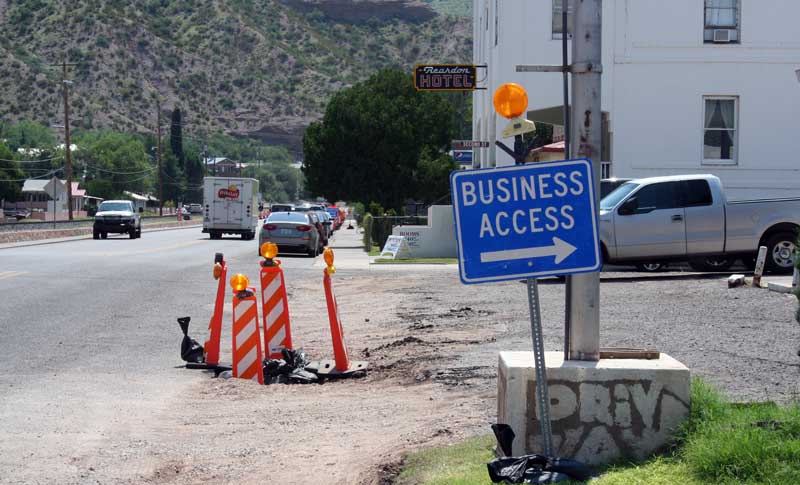 Photo By Gualterio Casias: A sign points to a business access where a sidewalk has been removed in front of The Liquor Store in South Clifton. Sidewalks along one side of U.S. 191 are being removed as part of an ADOT drainage improvement in that section of highway. Sidewalks will be replaced as the project progresses.

Motorists are cautioned to be alert while driving through the construction zone. Also, look for updates on the project’s progress on this website.