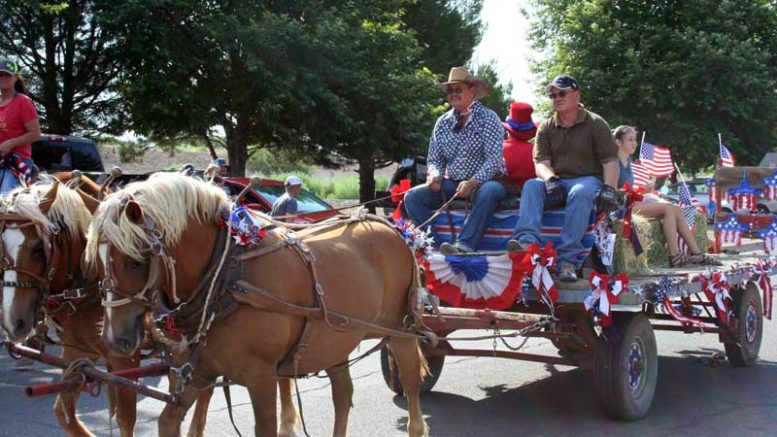 Contributed Photo/Gualterio Casias. Keith Wilkerson handles the reins on the horses during the 2017 Duncan Fourth of July Parade.

PIMA — Despite Gov. Doug Ducey’s recent rollback on the opening of select businesses and the requirement that gatherings of 50 or more be prohibited, a few Fourth of July celebrations are still moving forward.

The Town of Pima will conduct its Small Town USA Independence Day celebration Saturday, July 4, starting with the annual pancake breakfast at 6:30 a.m. at Heritage Park. The breakfast serves as a fund-raiser for the Eastern Arizona Museum.

The Pima community pool will be open; however, town officials said swimming will not be free. The day will conclude with fireworks at the Pima Rodeo Arena starting at about 8 p.m.

The fireworks show at Graham County Fairgrounds will take place. Watchers are asked to wear face coverings and observe 6-feet social distancing as recommended by the CDC. The show will begin shortly after sunset.

Thatcher officials said the town’s celebration has been cancelled.

While the other communities are paring down public gatherings, Duncan is going full steam ahead with its Fourth of July festivities.

There will be a pancake breakfast at 7 a.m.; parade at 8 a.m.; children’s games, a mask contest, petting zoo, and rolling car and bike show; a hot dog eating contest; the sheriff in a dunking booth; and a water balloon fight between 9 a.m. and 1 p.m.

Search and Rescue will host a barbecue at 5 p.m. and a pie-eating contest will take place at 6 p.m. as a lead-up to the fireworks show starting after sunset.