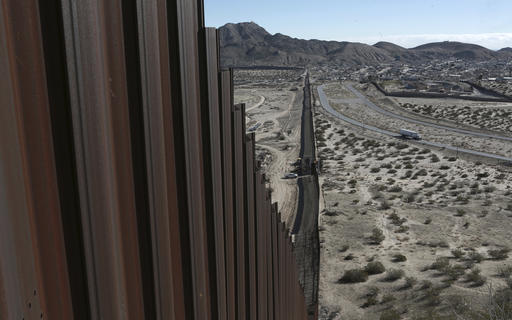 A truck drives near the Mexico-US border fence, on the Mexican side, separating the towns of Anapra, Mexico and Sunland Park, New Mexico, Wednesday, Jan. 25, 2017. U.S. President Donald Trump will direct the Homeland Security Department to start building a wall at the Mexican border. (AP Photo/Christian Torres)

HOUSTON (AP) — President Donald Trump announced his long-awaited plan Wednesday to build a wall on the 1,954-mile U.S. border with Mexico, calling for its “immediate construction” to stop illegal immigration, drug and human trafficking and acts of terrorism.

He is not the first president to embark on an aggressive buildup on the border.

Here’s a look at what is already there:

One-third of the U.S.-Mexico border, or 653 miles, is already studded with fence in a potpourri of styles, from menacing barriers to those that can be easily hopped. The barriers arose from the Secure Fence Act passed in the last year of the George W. Bush administration.

In California, the fence climbs out of the Pacific. Its meanest stretch, three layers thick, separates San Diego from Tijuana. Half those 14 miles are topped by razor wire. In dunes to the east, a “floating fence” of 16-foot steel tubes can be raised or lowered as sands shift.

Almost all of Arizona’s border is fenced, although the deterrence effect for human-and drug smugglers is constantly questioned. Cities such as Yuma and Nogales have high fencing but stretches of the remote desert have things like posts, wire-mesh and livestock fencing that can halt vehicles but people can hop. Vehicular fencing marks most of New Mexico’s 180-mile border.

Nearly all Texas’ 1,250-mile border is fence-free, the winding Rio Grande the only barrier. The state has just 110 miles of fences and fortified concrete levees .

Mountains, rivers and other natural barriers are expensive to build on and have been largely left alone . One stretch in Texas’ Hidalgo County along the Rio Grande cost $10 million a mile.

Politicians along the border, even GOP lawmakers in Washington, have endorsed surveillance technology as offering more security for the buck than fence or wall. The Border Patrol is expanding the use of eye-in the-sky tethered dirigibles that scan the horizon as they float on cables and of camera-studded towers. Its high-flying Predator drones have logged more than 3,000 hours a year since 2011.

And a major Boeing-led project in Arizona called the “SBINet,” whose network was supposed to marshal surveillance monitoring, proved a boondoggle, costing taxpayers $1 billion before it was canceled in 2010.

Not a single person involved in a terrorist act in the United States is known to have illegally entered the country from Mexico along the southwest border. Apprehensions of people at the border are far down from a peak of 1.6 million in 2000 to 408,870 in the year ending Sept. 30, with net immigration by Mexicans at zero.

More Central Americans were apprehended illegally crossing the border than Mexicans last year. The Central Americans are fleeing a humanitarian crisis — the world’s highest murder rates and abject poverty. Most surrender at the border and seek asylum. The Border Patrol has bulked up, too, from about 9,500 agents in 2004 to some 17,500 today.

The locals, meanwhile, mostly don’t want a wall. A May poll in U.S. southwest border cities found 72 percent against the idea. The Cronkite News-Univision-Dallas Morning News poll had a 2.6 percent error margin

Most drugs entering the United States sneak through legal ports of entry — not through fence-less wilds. They hide in concealed compartments of passenger vehicles or commingled with legitimate goods in tractor-trailers, the U.S. Drug Enforcement Administration says.

The U.S. Border Patrol says it seized 1.3 million pounds of marijuana, most of it in Arizona, and 4,180 pounds of cocaine, most split between the San Diego sector and Texas’ Rio Grande valley, in the most recent fiscal year.

Smugglers have been tunneling under fences for years, primarily in California and Arizona where marijuana is the payload. Authorities also occasionally find ladders constructed a foot higher than existing fence as creative smugglers find new ways in — and under.

And since 1990, the DEA says, 225 border tunnels have been discovered. Off-road vehicles and backpackers are also used, but that tends to require scouts. Ultralight aircraft and drones have also made cross-border airdrops, mostly of marijuana.

Elliot Spagat in San Diego and Astrid Galvan in Phoenix, contributed to this report.