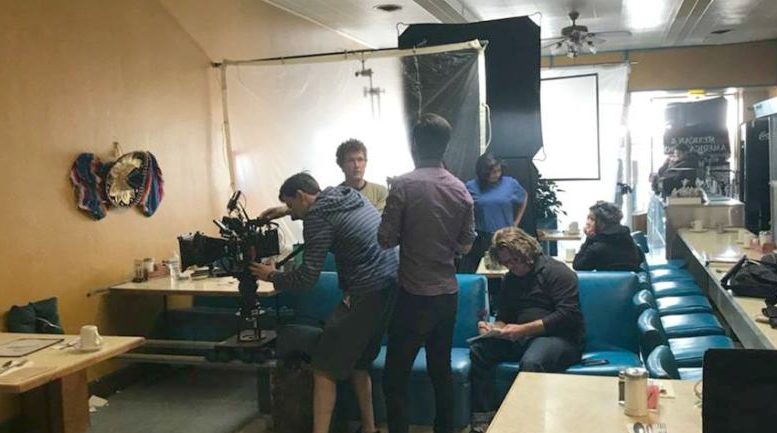 Contributed Photo/ Raymond Rivera: Complete with lighting equipment, multiple cameras, and a director yelling "Action!" The production of To Hell and Gone got underway Thursday.

SAFFORD- Lights, camera, action! The local scene doesn’t get to see the shiny glimpses Hollywood often, but when Gila Valley Central heard about the new movie, To Hell and Gone, being filmed in Safford, we went directly to one of the filming locations.

Filming started early Thursday morning, at the El Coronado Restaurant on the Safford Main street. The director, as well as all the cast and technicians, arrived late Wednesday night. The majority of the movie will be filmed in Klondyke, but the beginning introduction of characters will be in the restaurant. To Hell and Gone is a story centered around a crafty drifter who falls into the path of murderous thieves. The production crew were able to give Gila Valley Central several juicy details, including the fact that there will be an on-foot chase on Safford’s Main Street, as well as multiple shoot-outs in Klondike, and an airplane escape. However, the cast did not tell Gila Valley Central if the scruffy drifter of a main character, survives the ordeal. 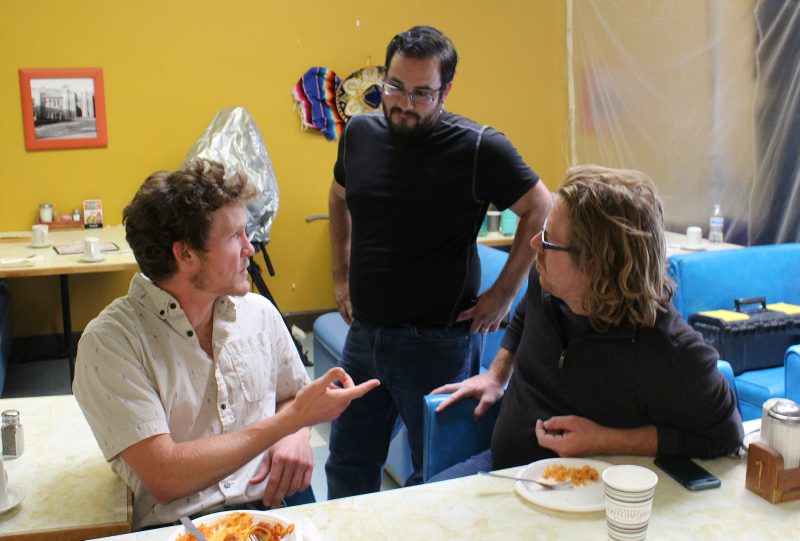 Gila Valley Central interviewed director/writer Kyle Moore, and actor/producer Carr Cavender.  Cavender told Gila Valley Central that his family owns land in the Klondyke area, and because of this the filming location would be much easier and cheaper to work with. Having most of the film located in Klondyke, the rest of the town scenes had to be done relatively close to Klondyke, making Safford the prime location.

“I told Kyle how about my parent’s property out in Klondyke, how we would have free range over it and no one would be able to tell us what to do, and we wouldn’t have to pay for it, so Kyle and I traveled out to Klondyke and we were like this is a great place to make a movie. So that’s how Klondyke started,” Carr said. “We knew we had my parent’s property in Tucson as well, and Safford is the closest town to Klondyke so for town scenes it was either Willcox or Safford, and Safford seemed like the best bet logistically, especially because it’s closest. So we wandered around location scouting and came across El Coronado and met Ray and started putting things together.”

Moore told Gila Valley Central a brief rundown of the movie, with the action of the movie starting in Safford. Essentially, the introduction of the main character to the audience is in the El Coronado Restaurant. 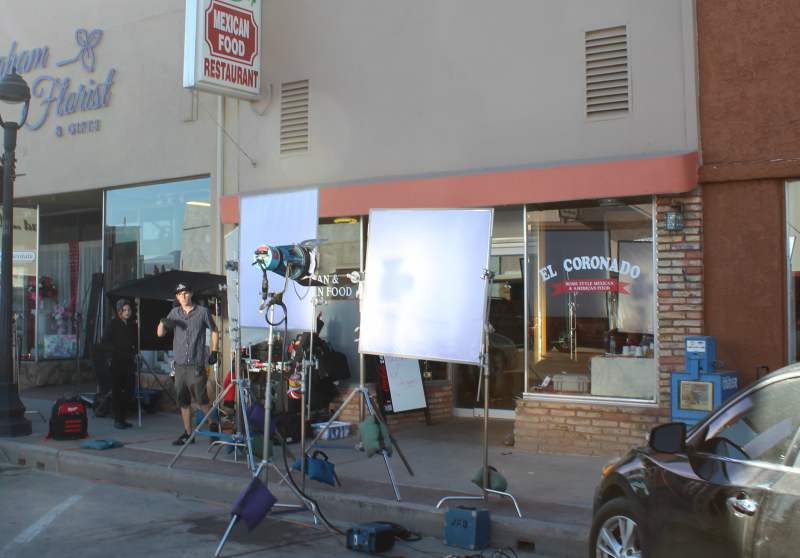 “It’s about a crafty drifter who crosses paths with a bunch of murderous thieves in the middle of nowhere in Klondyke Arizona so the action starts here in Safford, in the town the first 10 minutes of the movie, but both parties. The criminals and the drifter, get taken out to the middle of nowhere and they’re kind of stranded out there and they have to deal with each other and see who survives the movie,” Moore said. “That’s kind of the heart of the movie, (that)  is everything out in Klondyke. This is kind of the preamble the prelude here in town.”

Carvender went into greater depth of his character. Although his character isn’t necessarily bad, the drifter is unfortunate enough to fall into incredibly dangerous company. However, Carvender also elaborated on the chase scene, which is mostly on foot.

“The stranger is kind of a homeless wanderer and he is just wandering through Safford and he gets caught up in some trouble. It’s not necessarily his fault. And then there’s a police chase scene, every time we told the Safford police that we were doing a chase scene they were like, “oh my god they’re like vehicles?’ And we’re like, no it’s just running, they’re just on foot. Much more manageable,” Carr said. “The stranger starts in Safford. The stranger will get chased by some police officers, and then have to jump over the hood of a car on fifth, so we’re going to shut down fifth for an hour or two hours.” 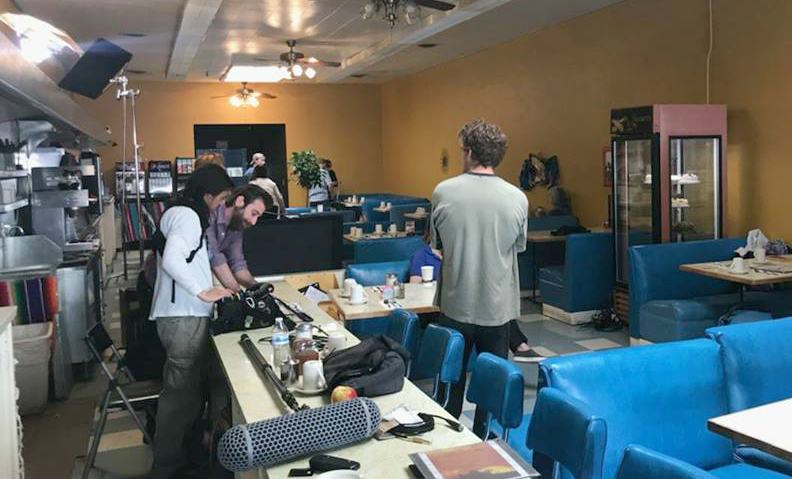 Contributed Photo/ Courtesy of Ray Rivera: Filming the introduction of the main character at the restaurant, local regulars are extras in the movie.

Moore told Gila Valley Central that most of the cast is from Los Angeles, but at this point in the film process everything is a ‘controlled chaos.’ For now, however, everything is a new experience for Moore and Cavender.

“The best two words that describe film making is controlled chaos. We’ve done some small things in L.A. together, so this is our both feature and our first movie in Arizona. So it’s a couple of first for both of us.”

Cavender and Moore hope to return to the Gila Valley in 2019, after the premier of the movie at a film festival. When the producers return, they hope to show the movie in the Safford Historical Theater if it is ready, and if not there than perhaps the other local theaters. Until then, however, Moore and Cavender are grateful for the generosity of the Safford Locals.

“We just want to say thank you to the city of Safford, because everyone has been so cooperative and agreeable in letting us do this. Even having all these cones out and the grip truck out there, it’s really nice to let us do these things,” Moore said. “Because in LA this would not be happening without a lot of money behind it.”

The video above was found on the To Hell and Gone Indiegogo site. It shows many of the locations that the film will be shot in.

Natalie Wetta, who is a signed actor whose role is the waitress in the movie, told Gila Valley Central that the production crew arrived on Wednesday night. The crew was amazed at how picturesque Safford’s Main Street was.

“I’ve never been to Safford. I got in last night around 11:00, there was no one on the streets and this entire town looks like a movie set,” Wetta said. “We drove down Main Street just to check out the location and it looks like a prop movie set, it’s so cute. It’s great, everyone has been so nice, and it seems like a really great town.” 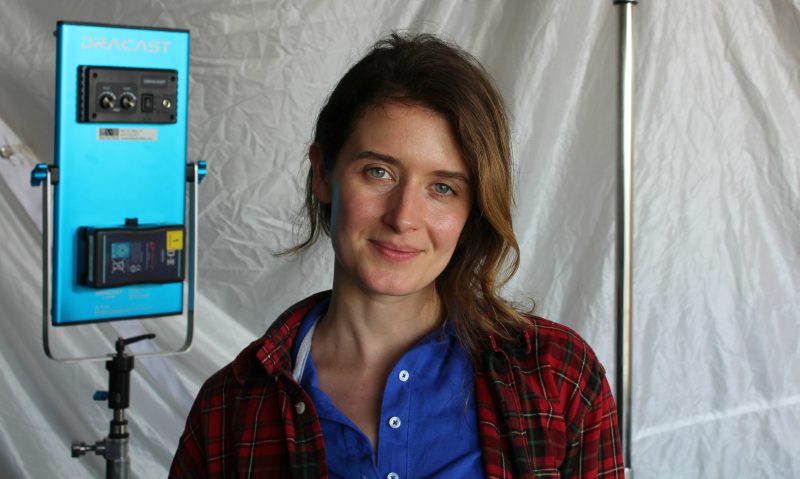 Wetta told Gila Valley Central that she was raised in Phoenix and she has been working in New York and Los Angeles. This is the first time Wetta has worked in the Gila Valley, and wished that more films were made in Arizona.

“I was born and raised in Phoenix. I’ve been acting in New York and L.A. So this is the first time that I’ve filmed in Arizona, and I love it and I wish more stuff would film in Arizona. There’s so many different landscapes here, and it’s cheaper, they need to get a tax incentive.”

“It’s a really good script. It’s kind of a modern western. It’s really interesting, unique script. I was excited to come back and do it,” Wetta said.

Gila Valley Central will update the story when more information surfaces. To see the Indiegogo site for To Hell and Gone, click here.

In the video above, Moore (on left) and Cavender (on right) discuss their feature.

“To Hell and Gone” filming of the hit and chase slideshow