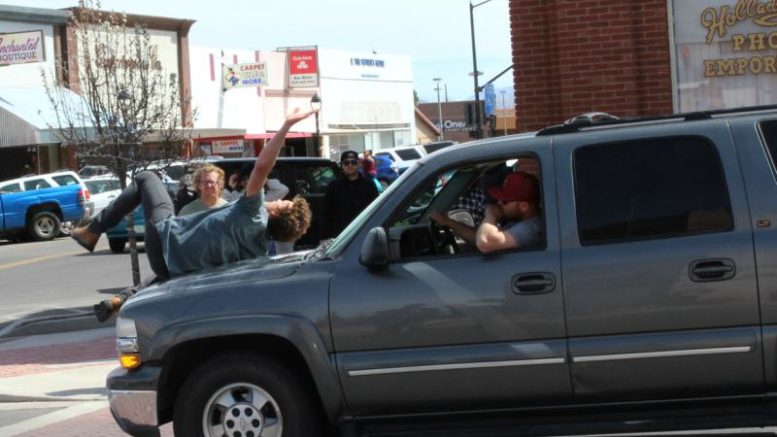 Contributed Photo/ Courtesy of Art Tapia: Carr Cavender is thrown onto the roof of the car while filming the chase scene.

SAFFORD- The crew and cast of the movie filming in Klondyke and Safford worked together with local authorities to film a chase scene on Friday.

The chase scene, where the main character called, “The Drifter” is chased down the street, was filmed around 11:00 Friday. The street was blocked off, and local authorities even participated in the film. According to an interview Gila Valley Central conducted on Thursday, the local officers simply made a u-turn to view what was going on during the chase scene. Actor/producer Carr Cavender told Gila Valley Central that although local police were slightly in awe of the possibility of a vehicle chase, in all reality the chase scene was completely on foot.

Thanks to Art Tapia, of Trinidad Tax Service, Gila Valley Central has a slideshow of the action for viewer’s consideration. Keep in mind, these movie makers are professionals, and these stunts should not be done at home.

Filming started early Thursday morning, at the El Coronado Restaurant on the Safford Main street. The director, as well as all the cast and technicians, arrived late Wednesday night. The majority of the movie dubbed To Hell and Gone will be filmed in Klondyke. To Hell and Gone is a story centered around a crafty drifter who falls into the path of murderous thieves. The production crew were able to give Gila Valley Central several juicy details, including the fact that there will be an on-foot chase on Safford’s Main Street, as well as multiple shoot-outs in Klondike, and an airplane escape. However, the cast did not tell Gila Valley Central if the scruffy drifter of a main character, survives the ordeal. To view more information on the movie To Hell and Gone visit Gila Valley Central’s story by clicking here.

A glimpse into the new movie production at El Coronado restaurant