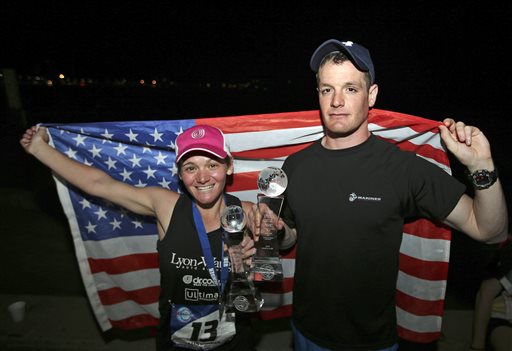 BOSTON (AP) — Two American endurance athletes have redefined the meaning of the term “globetrotter” by running seven marathons in seven days on all seven continents.

And they both did it in world-record time.

Daniel Cartica, of Chicago, and Becca Pizzi, of Belmont, Massachusetts, won the World Marathon Challenge on Friday — the first U.S. competitors to sweep the strength-sapping event.

Cartica, a U.S. Marine Corps captain, and Pizzi, a day care center operator, finished with a beachfront marathon in Sydney. They and 13 others began Jan. 23 with a marathon in Antarctica, where the sub-zero temperatures caused Pizzi’s iPod to freeze and burst.

In between, on consecutive days, they ran 26.2 miles in Chile, Miami, Spain, Morocco and the United Arab Emirates. Cartica averaged around three hours, 33 minutes per marathon, with an event best of 3:12:46 in Chile. Pizzi averaged well under 4 hours; her fastest was 3:41:20 in Miami.

They now join a club more elite than those who have voyaged into space or scaled Mount Everest.

“We just made history,” Pizzi told The Associated Press. “I believed in myself since the moment I signed up for it. I went for it and got it done. When you believe in yourself, anything is possible.”

Competitors squeezed the seven marathons in a span of 168 hours — 59 of those spent trying to recover aboard the charter flight that shuttled them 23,560 miles to all the continents.

Along the way, they had to cope with extreme cold and heat as well as wildly varying running surfaces: snow in Antarctica, sand in the Sahara.

Cartica, 27, who grew up in Poughkeepsie, New York, dedicated his run to the four Marines and sailor killed in July when a gunman attacked a U.S. Naval Reserve Center in Chattanooga, Tennessee.

Pizzi, 35, was the first woman across the finish line in all seven races.

Her highs? “Antarctica and running on glaciers. It was absolutely stunning.”

The 15 competitors gained a huge following on social media. Pizzi said they were all going back through thousands of emails and messages from well-wishers ahead of a celebratory lunch at the Sydney Opera House.