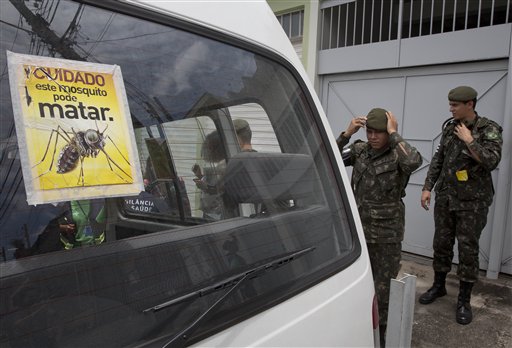 Army soldiers prepare for a clean up operation against the Aedes aegypti mosquito, which is a vector for transmitting the Zika virus, in Sao Paulo, Brazil, Thursday, Jan. 28, 2016. The sticker reads in Portuguese " Beware, this mosquito can kill ". (AP Photo/Andre Penner)

RIO DE JANEIRO (AP) — The Latest on the Zika virus and fears it could be linked to birth defects (all times local):

Gregory Taylor said Friday that two people from British Columbia, one from Alberta and another from Quebec contracted the virus abroad. He says two have recovered and didn’t give details on the other two.

Taylor says there is little to no risk of contracting the virus in Canada since mosquitoes that transmit the virus are not adaptable to the climate.

The World Health Organization says Canada and Chile are the only two countries in the Americas where the virus is not likely to spread.

Thousands of soldiers, health officials and first responders have been fanning out across the Dominican Republic to fumigate and clean up mosquito-prone areas and educate people about the Zika virus.

The campaign aims to tell people about Zika’s symptoms, how to avoid it and how to eliminate areas where it breeds.

The Caribbean country has reported 10 confirmed cases, none of them involving pregnant women. But the military said this week it will assign 100 doctors to help in detecting and treating cases.

Health Minister Altagracia Guzman warned on Friday that half a million people in the Dominican Republic could become infected if no preventive measures are taken.

Brazilian President Dilma Rousseff says the federal government has launched a nationwide cleanup operation to eliminate breeding areas of the mosquito that transmits the Zika virus, which researchers in have linked to a rare birth defect.

Rousseff made her remarks at a Friday press conference after she, five state governors and six cabinet members held a videoconference to discuss strategies to combat the Aedes aegypti mosquito.

She says the cleanup operation began Friday at all installations run by the armed forces and at all federal educational, health and other facilities.

She Brazil will lose the war against the insect unless all of society mobilizes to eliminate the pools of stagnant water that serve as the mosquito’s breeding grounds.

Nigeria’s Health Ministry is warning citizens against traveling to Latin America because of the Zika virus outbreak, and is especially recommending that pregnant women not go there.

Health Minister Isaac Folorunso Adewole is urging health professionals at all ports of entry to examine anyone coming from Latin America for signs of the Zika virus. Friday’s statement says he’s urging Nigerians to tell health workers about any cases of unexplained fevers that last more than 48 hours, especially in those with recent travels to Latin America.

While the Zika virus originated in Africa, Adewole says there are no current cases in his country.

Officials from Brazil and international health organizations are trying to determine if a widespread outbreak of the virus there is related to a seemingly sudden upswing in cases of birth defects.