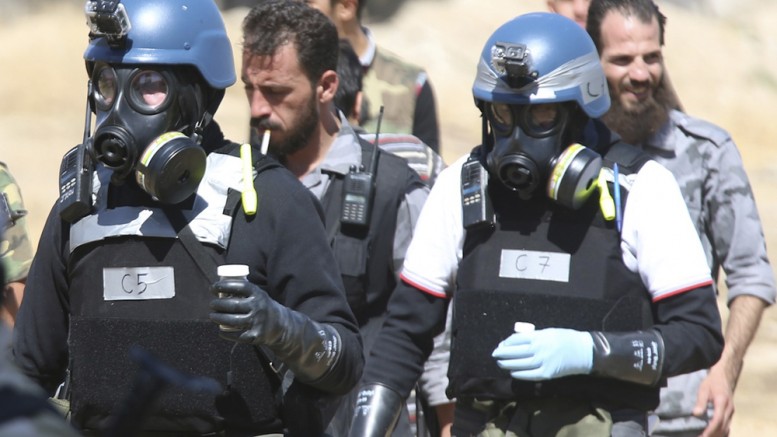 GENEVA (AP) — The Latest on U.N.-hosted peace talks for the Syrian civil war in Geneva (all times local):

Staffan de Mistura says he is still waiting for “formal indication” that the opposition coalition, known as the Higher Negotiating Committee, will attend the talks.

De Mistura ignored journalists’ questions about a report by the Saudi-owned Al-Arabiya news network that the main opposition group has agreed to come to Geneva.

Indirect peace talks aimed at resolving Syria’s five-year conflict have begun at the U.N, headquarters in Geneva, without the participation of the main opposition group.

Friday’s talks are the first since two rounds of negotiations collapsed in 2014. Syria’s conflict has killed more than 250,000 people.

The main opposition delegation has said it will not participate without an end to the government and Russian bombardment of civilians and a lifting of sieges in rebel-held areas.

The meetings are part of a process outlined in a U.N. resolution last month that envisages an 18-month timetable for a political transition in Syria.

The first meeting is between the U.N. Special Envoy to Syria Staffan de Mistura and a government delegation headed by the country’s ambassador to the U.N., Bashar Ja’afari.

A Syrian opposition official says the main opposition group is staying away from peace talks until they get a response to their demands from the United Nations.

Basma Kodmani, a member of the opposition’s negotiations team, says they are still waiting for response from the U.N. regarding lifting the sieges on rebel-held areas and an end to Russian and Syrian bombardment.

Opposition officials say they will not join the Geneva talks unless these demands are met.

The talks were scheduled to begin in Geneva on Friday and the Syrian government delegation is expected later in the day.

The U.N. special envoy to Syria Staffan de Mistaura said Thursday that the peace talks he plans to launch in Geneva “in the next few days” are an opportunity not to be missed.