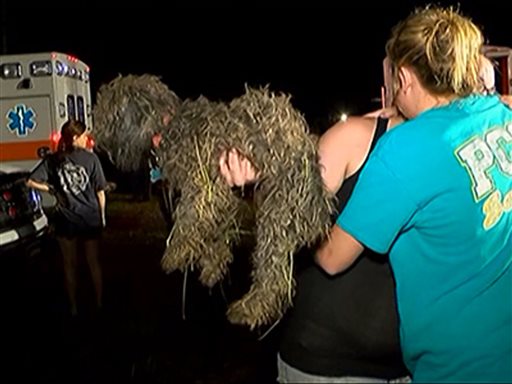 In this image taken from WLBT video, a dog is lifted shortly after being pulled up along with a boy by emergency workers from a well they were trapped, about 70 miles (113 kilometers) south of Jackson in Lincoln County, MS., Monday, Sept. 7, 2015. Clifford Galey, civil defense director for Lincoln County, told The Daily Leader newspaper that a 4-year-old boy and his dog had been trapped in a well nearly 25 feet (7.6 meters) deep. They were rescued a few hours later to the cheers of emergency workers. The hole was only about a foot and a half wide. (WLVT via AP) JACKSON, MISSISSIPPI OUT, MANDATORY CREDIT

BROOKHAVEN, Miss. (AP) — After spending three hours in an old water well, a 4-year-old boy was rescued along with his dog in southern Mississippi as emergency workers cheered.

Lincoln County Emergency Management Agency Director Clifford Galey says Gabe Allbritton was in the yard with his grandmother when he disappeared Monday afternoon.

Galey said rescuers tried several times of hoist the boy up with a rope. He said they finally made a seat with the rope, the youngster climbed in and was pulled to safety.

Galey said the dog was pulled up next when it stepped into a loop that was tightened quickly.

He said the dog had been missing for about a week and the boy must have heard him bark.

He said the youngster took several steps and fell into the hole which was overgrown with weeds.