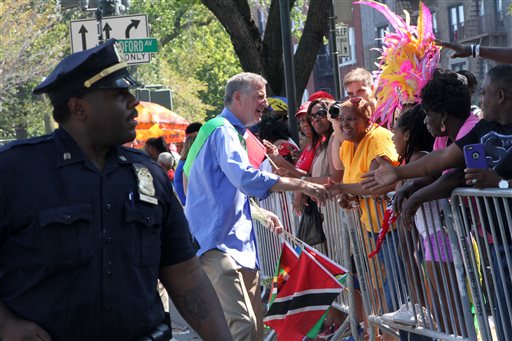 NEW YORK (AP) — The West Indian Day Parade, a rollicking, colorful celebration of Caribbean culture, music, style and food, rolled through New York City’s streets Monday but, once again, was marred by pre-dawn violence that left one man dead and an aide to Gov. Andrew Cuomo in critical condition.

Cuomo identified his wounded staffer as Carey Gabay, a first deputy general counsel at the Empire State Development Corporation. Gabay was walking with his brother near the Brooklyn parade route at 3:40 a.m. when he was caught in the crossfire between two gangs, according to police officials.

The pair had been walking back from a pre-parade party celebrating West Indian Day. A bullet struck Gabay, 43, in the head.

Gabay’s condition remained critical on Monday night, according to a governor spokeswoman.

The shooting was one of several outbursts of violence in the neighborhoods surrounding the parade, which included the stabbing death of a 24-year-old man at 2 a.m. near Grand Army Plaza.

Police have not yet released the victim’s name or any more information related to the stabbing.

No arrests have made been in either incident, police said.

Bloodshed before or after the West Indian Day celebration has become a sadly familiar part of the parade routine. Last year, a recent parolee opened fire into a crowd of revelers, killing one man and wounding several others. And in 2013, a 1-year-old boy sitting in his stroller was killed by a bullet meant for his father.

Mayor Bill de Blasio and Police Commissioner William Bratton dismissed talk of scuttling the pre-parade festivities — which center on a surreal midnight march known as J’Ouvert — and said the New York Police Department was working with local leaders to make the event safer. There was a heavy police presence along the route, and several NYPD helicopters hovered overhead.

The parade drew hundreds of thousands of people to the stretch along Eastern Parkway. Throbbing basslines pulsated along the route, propelling outlandishly clad revelers to dance and those along the sidelines to bob their heads as they ate indigenous foods.

“This is our heritage. It means so much to me to see all these colors and music,” said Alicia Jackson, of Brooklyn. “It’s one of my favorite days of the year.”

Politicians dotted the route, with de Blasio and his wife, Chirlane McCray, who is of Caribbean descent, drawing cheers as they waved flags and periodically dashed to the sidelines to shake hands and pose for selfies.

But the parade was also the latest venue for New York’s most high-profile political feud. The march and an official pre-parade breakfast were the first public events since July in which Cuomo and de Blasio, who are locked in a simmering dispute, were both supposed to attend.

But their paths never crossed. Cuomo left the breakfast about 10 minutes before de Blasio arrived, and the two men, both Democrats, marched separately.

At the breakfast, Cuomo was asked if he planned to speak to the mayor. The governor responded by asking, “Is he here?” and when told no, Cuomo glared and bluntly said, “There’s your answer.”

Hours after the parade, Cuomo and several other elected officials flew to Puerto Rico to offer advice to the island government grappling with a debt crisis. De Blasio was not invited.

This story has been corrected to show that Carey Gabay’s wife was not pregnant with the couple’s first child. A spokeswoman for the governor’s office said Gov. Andrew Cuomo misspoke.