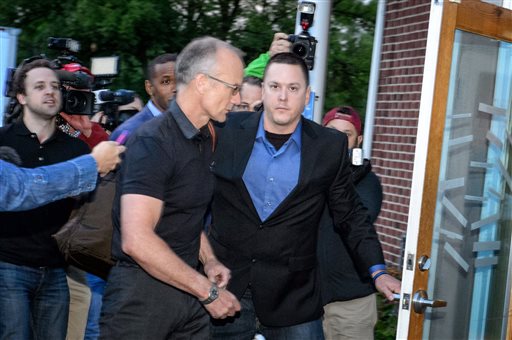 Dentist Walter Palmer enters his dental practice on Tuesday, Sept. 8, 2015 in Bloomington, Minn. Palmer returned to his practice after weeks out of the public eye. He was the subject of an international uproar after he was identified as the hunter who killed the famous lion in Zimbabwe. (Glen Stubbe/Star Tribune via AP) MANDATORY CREDIT; ST. PAUL PIONEER PRESS OUT; MAGS OUT; TWIN CITIES LOCAL TELEVISION OUT

BLOOMINGTON, Minn. (AP) — A Minnesota dentist who killed Cecil the lion returned to work Tuesday after weeks away, walking silently into his small dental practice, past swarming media and a handful of protesters calling for him to be sent to Zimbabwe to face trial.

Walter Palmer had largely retreated out of the public eye since he was identified as Cecil’s Killer in July, offering little insight into the hunt that catapulted his name onto the world stage until a Sunday interview with The Associated Press in which he defended the kill as legal and announced his plan to return to work.

Some of the uproar bubbled up shortly after sunrise Tuesday as a security guard whisked Palmer inside the clinic, past reporters shouting questions and a protester repeatedly yelling “Extradite Palmer!” Palmer walked from a nearby street where police had blocked off traffic, meeting the guard in the parking lot of his Bloomington practice and rushing through a door covered in messages reading: “Justice for Cecil” and “May you never hunt again.”

The small throng of protesters didn’t match the furor in the days after Palmer was named as Cecil’s killer during a July hunt in Zimbabwe’s vast Hwange National Park, when hundreds gathered to hold vigils for the big cat with the black mane and forced River Bluff Dental to temporarily close. Just a few protesters were on site when he arrived.

The crowd grew to roughly a dozen by midmorning, holding signs calling for an end to trophy hunting and chanting on a megaphone: “We will never falter! Prosecute Walter!”

Cathy Pierce said she drove more than an hour from her home in East Bethel to the Bloomington clinic to “fight for animals who can’t fight for themselves.”

She scoffed at Palmer’s suggestion in his interview with the AP that protesters had unfairly targeted his employees and family, in some cases threatening violence.

“We’re not picking on his staff or his family. We’re picking on him,” she said. “We want him to know that we’re not going to forget.”

While Palmer’s guides on the hunt have either been charged or await charges for their involvement in Cecil’s killing, the Zimbabwean government’s pursuit of the dentist has cooled off amid fears it could hamper a hunting industry that is lucrative and important for the country.

Palmer hired local guides for the hunt and used an arrow to hit the lion, who authorities have said was lured from a protected wildlife preserve. Authorities say they then tracked the lion before shooting him.

It’s been a month since Zimbabwean officials announced that police would process paperwork to extradite Palmer for participating in the hunt, but as of Monday, a police spokeswoman in Harare, the African country’s capital, said there were no new developments in the case.

An attorney for Palmer told AP that he offered to make Palmer available to the U.S. Fish and Wildlife Service to talk about the case several weeks ago, but he hasn’t heard back.

“If some governmental agency or investigative unit would make a claim that he had violated some law, then we’d talk about it,” said Joe Friedberg, a lawyer advising Palmer pro bono. “There haven’t been any official allegations by anybody that he has done anything wrong.”

Fish and Wildlife spokeswoman Laury Parramore said Tuesday that she has no update on the case but that an investigation continues.

Stephanie Michaelis, who lives near the clinic, walked over to argue with protesters, telling them to leave Palmer alone. She said the uproar over Cecil’s death was overblown and that people should be more concerned about abortions and threats to human life.

Among the patients Tuesday was Thomas Dressel, who said his wife was a regular but it was his first visit as a patient. Dressel said he trusts Palmer’s insistence that the hunt was legal and that he had no idea he was tracking a famous lion. Dressel also said that as a retired doctor, he wanted to support a fellow medical professional.

“I support his business. I’m sure that this has really hurt his practice,” he said.

Bloomington Police Deputy Chief Mike Hartley said police would be there as long as media were gathered. He said police don’t believe Palmer’s safety is at risk.