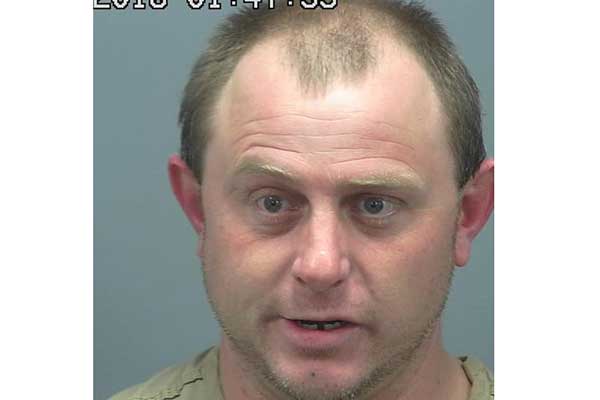 SAFFORD – On Monday morning, officers were observing activity in Walmart’s parking lot when a particular vehicle got their attention when the vehicle’s passengers pointed at them as the car left the lot. An officer caught up to the car at the traffic light of Hwy 70 and 14th Avenue and pulled up next to it. The officer recognized the driver through previous criminal dealings as Joshua Stewart. Stewart, it turns out, had a local warrant. The officer initiated a traffic stop at a nearby convenience store. Stewart got out of the car and was met by authorities who arrested him on the warrant.  When asked if he possessed anything illegal, Stewart responded that he may have meth in one of his pockets.

When the officer was handcuffing Stewart, police recognized the two passengers in the car due to numerous criminal contact. Before the officer secured Stewart in the back of his patrol car, a pat search was conducted that revealed a baggie containing a white substance in his right leg pocket. The substance was wrapped inside of cigarette cellophane and also what appeared to be a portion of a plastic shopping bag inside of the cellophane. The substance later tested positive for meth. Stewart reported to authorities that he was going to deliver the meth to a friend. The officer continued the pat search and found a bicycle wheel light in Stewart’s pocket. Stewart told the police he had stolen it while he was at Walmart. He was unsure if the man and woman with him had stolen anything while they were there.

Assisting officers asked the passengers to exit the vehicle and state what they owned in the car. The woman pointed to a backpack on the seat and said it belonged to her, but said nothing illegal was inside. After giving the officers permission to search it, they found a new and unopened container of vehicle fuses and an ihome speaker that appeared to be new. The woman told the officer the fuses were already in the bag and the speaker belonged to them. She and the male passenger reported they went to Walmart to get groceries and Stewart was just giving them a ride. Police confirmed that the male passenger was trespassed  from Walmart, so a citation was written to him. Surveillance in Walmart would later be viewed.

During the investigation, it was also discovered that Stewart’s license was suspended. Stewart had contacted his fiance as he was being pulled over, so the vehicle was released to her when she arrived at the scene. Stewart was transported to the Graham County Jail where he was booked for his warrant, and advised of charges of possession of methamphetamine, shoplifting and driving on a suspended license. He was also formally trespassed from Walmart.