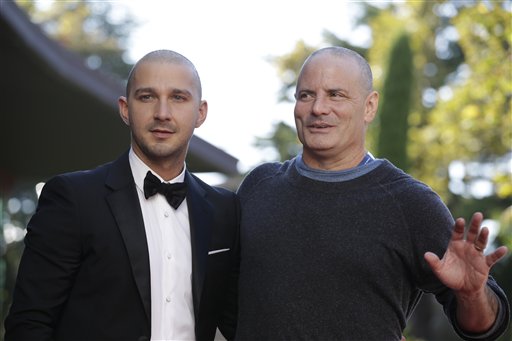 VENICE, Italy (AP) — Shia LaBeouf says his new film, “Man Down,” helped him get back on track.

The actor plays a traumatized U.S. Marine searching for his estranged wife and son after cataclysm strikes in the thriller “Man Down,” which is competing in the Venice Film Festival’s Horizons section for new discoveries.

Despite its blood-and-guts drama, LaBoeuf and director Dito Montiel say “Man Down” isn’t a war story, but the tale of a man trying to get his son back — almost a post-apocalyptic “Kramer vs. Kramer.”

It’s LaBeouf’s second film with director Montiel, after 2006 drama “A Guide to Recognizing Your Saints,” and he says the script came at exactly the right time.

“He came to my house when I was in a really low place and offered it to me like therapy, like ‘here’s a healing process so we can jump into together and get well,'” LaBeouf told reporters in Venice on Sunday.

The 29-year-old “Transformers” star has made headlines with a series of bizarre escapades — including yelling from the audience during a Broadway show and wearing a paper bag on his head to a movie premiere — and has been treated for an alcohol problem.

From now on, he says he’s only working with “friends.”

“I do much better with loving, familial environments where you feel like you can fail and the dude will get you on the other side. So I’m trying to make friends now and work with those people.”

“He’s my hero, I love him,” said LaBeouf, who also appeared with Oldman in 2012 bootlegger drama “Lawless.”

“I do anything he tells me. I follow him around like a weirdo. I hear he’s going to sound mix or something and I’ll just show up and dude’s looking at me like ‘what are you doing here?’ because I’ve already seen the sound mix but I’m back there and go ‘Hey, what’s up Gary? Looking at sound mix huh?'”