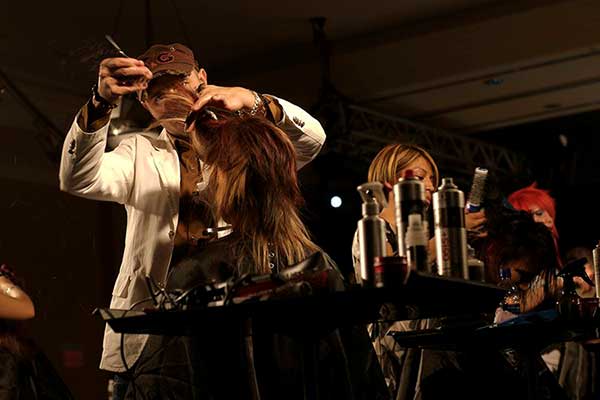 Cosmetologists - shown here during a competition - are among the professionals who could have licenses from other states recognized in Arizona under a new law that aims to save professionals the time and cost of retraining and retesting to get licensed to work in a new state. (Photo by Joseph Nicholson/Creative Commons)

The board had “over 40 applications pending prior to the application date, waiting to be granted on the first day,” said Emily Rajakovich, the director of boards and communications in Gov. Doug Ducey’s office. Those new licenses – 49 by Thursday – took effect Sept. 1.

It was the most extreme example – Rajakovich called it one of the state’s success stories – of the new law that requires most professional licensing boards and commissions in the state to accept valid out-of-state licenses for people looking to hang a shingle in the state.

The first-of-its-kind law means that trained professionals do not have to spend time and money for training and testing for an Arizona license to do what they already know how to do.

Similar waivers had previously been available only to military spouses, but the new law extends that to professionals such as cosmetologists, real estate agents, teachers, contractors, health care workers, veterinarians, physicians and dentists.

The bill, which has been held up as a model for other states, was a legislative priority this year of Ducey, who said in his State of the State address that “if people want to work, let them work,” adding that professionals “don’t lose their skills simply because they move to Arizona.”

The National Conference of State Legislatures reported that where one job in 20 required an occupational license 60 years ago, the number is one in four today.

While licensing can protect public health and safety by preventing unqualified professionals from working, NCSL warned that “excessively onerous requirements” can create unnecessary job barriers. It added that license requirements often disproportionately prevent immigrants, military families, those with criminal records and other marginalized groups from getting work.

Rep. Warren Petersen, R-Gilbert, who sponsored the universal licensing bill, said he was approached by some professionals who “asked to be removed or exempted from the legislation.” But Petersen said in a recent phone interview that regulatory boards should not “get to limit who you want in your profession,” if an applicant is qualified.

State boards and agencies spent months preparing for the law and the influx of applications it was expected to bring. Besides the behavioral health examiners’ board, Rajakovich said the state dental board has accepted its first application under the new law and that the state osteopathic board got two applications on the first day.

Other boards will not be affected as drastically. The Arizona State Board of Cosmetology already had reciprocity agreements with other states’ licensing boards, and will not have to heavily revamp its own out-of-state licensing processes, according to a board representative. Although the board has been getting a lot of phone calls about the new law.

Licensed cosmetologists from other states need only prove that they live in Arizona, “no matter if it’s full year or month,” the board official said, and take an infection protection class.

There are still safeguards: The new license still needs to be approved by the respective licensing board in Arizona, applicants must be in “good standing in all states where they are licensed,” without previous or current investigations or complaints, and applicants must have held their out-of-state license for at least a year. Health care professionals must also pass a background check.

Rajakovich said she has been working with Arizona boards to make sure the universal licensing recognition was ready to launch last week, updating online applications, making sure staff were ready to answer applicants’ questions, and talking to board directors.

Ducey spokesman Patrick Ptak said that while reciprocity programs will not be overly affected, the new law is a “cleaner and simpler path for those qualified” as well as a “decrease the burden in the application process.”

The goal, he said, is to make it make it easier for people to find jobs.

“Over 200 people a day are moving to Arizona,” Ptak said. “We want to make Arizona a place of opportunity for all.”

More boards are like the Arizona State Board of Dental Examiners, which had to completely revamp its application process to comply with the new law. Ryan Edmondson, executive director of the board, said he uploaded a “brand-new application last night at 10 p.m.” on the night before the law took effect and is now updating online applications and tracking those that come in from out of state, as well as how many are approved.

Edmondson said he worries that the new law may lead to more professionals looking for jobs in Arizona than there are jobs. He said the board had already approved 4,600 hygienists, 4,900 dentists and 10 to 15 denturists this year before the new law took effect.

“It may make it harder for people here to get jobs,” said Edmondson, who worries that the law may “saturate markets” with professionals.

But Ptak said there are “more jobs than people to fill them” in Arizona, with the state particularly looking for doctors and other medical professionals, hoping to expand overall health care professions in the state. The new law should let the state “recruit from the best and brightest” for Arizona jobs, he said.

Jim Knupp, the chief of communications operations at the Arizona Registrar of Contractors, said he thinks the universal licensing recognition bill might “help small businesses get started more quickly.”

Petersen agreed, saying that while professional safeguards are important, regulatory boards can “hurt entry-level and working-class people who are trying to get started,” as well as start-ups and small businesses.

He said he hopes the state’s new law will send a message that Arizona is “open for business,” especially for those who don’t want “government to get in the way.”