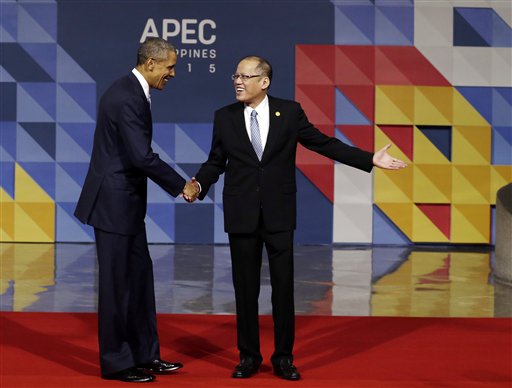 MANILA, Philippines (AP) — Leaders from 21 countries and self-governing territories are in Manila for the Asia Pacific Economic Cooperation summit. The meeting’s official agenda is focused on trade, business and economic issues but terrorism, South China Sea disputes and climate change are also in focus. (All times are local.)

China’s president says the killing of a Chinese hostage by the Islamic State shows that terrorists are the “common enemy of humankind.”

Xi Jinping is quoted by the official Xinhua News Agency as saying China “strongly condemns the brutality of the killing of a Chinese national.” He was speaking at the APEC summit.

IS claimed in its magazine it had killed two hostages from Norway and China it was holding for ransom.

The Chinese hostage was Fan Jinghui, 50, a self-described “wanderer” from Beijing who once taught middle school.

APEC host Philippine President Benigno Aquino III has urged the group to work on promoting prosperity and ending poverty for all in the region.

He says that “represents our vision for an Asia-Pacific that embraces a growth agenda that benefits everyone.”

Aquino called for growth that creates jobs, puts children in school and food on tables, raises standards of living, protects the environment and fosters creativity and innovation.

He says this year’s leaders’ retreat should be an incubator of ideas that will improve the region’s prospects for the future, leaving a “world that is better than what we found.”

A copy of the APEC leaders’ declaration seen by The Associated Press says they “strongly condemn” all acts of terrorism and are stressing the “urgent need for increased international cooperation and solidarity in the fight against terrorism.”

The statement is a rare departure from convention for APEC which typically prefers to focus on economic and business issues.

The leaders of the 21 Pacific Rim countries and self-governing territories that make up APEC say their meeting is being held in the shadow of terrorist attacks in Paris, Beirut and against a Russian aircraft over Sinai.

They say economic growth, prosperity and opportunity are among the most powerful tools to address the root causes of terrorism and radicalization.

A barricade of police, cargo containers and fire trucks blocks about 1,000 anti-globalization protesters marching on the venue of the APEC meeting in Manila.

Police are using water cannons and canes to try and disperse the increasingly rowdy protest.

Earlier about 100 students clashed with police at a public square, with the two sides pushing and shoving and police beating protesters with their batons after the students crossed over a security barricade.

The protesters carry banners that read “Junk APEC” and “Down with the Puppet U.S.-Aquino Regime.”

Protest leader Renato Reyes of the left-wing alliance Bayan says over the past two decades “APEC and imperialist globalization have only benefited the rich countries while further impoverishing developing countries like the Philippines.”

Protesters also marched toward a separate media center for the APEC meetings.

According to presidential spokesman Herminio Coloma, Aquino said: “Welcome, President Xi! Thank you for coming to Manila and attending the APEC meeting.” He then gestured for Xi to join the other leaders.

China is at odds with the Philippines and other Southeast Asian nations over China’s expansive claims to the South China Sea. The disputes are not part of the APEC agenda.

Meanwhile, Aquino and President Barack Obama have had a meeting and joint press conference and Obama has underlined his support for allies in the region such as the Philippines.

Police have thwarted activists dressed as animals from bringing climate change and animal rights to the attention of APEC leaders.

A “jeepney” vehicle full of PETA activists in full body animal costumes was making its way around Manila’s financial district Makati where President Barack Obama, Chinese President Xi Jinping and other leaders were speaking. But it was stopped by police before getting near the venue.

A kangaroo was holding a sign that read “I Am Not Leather” while a pig held a sign in Spanish “Stop Climate Change, Go Vegan.” A seal, a rat, a cow, and an elephant were also inside the jeepney, holding placards in various languages and waving to people on the streets.

People for the Ethical Treatment of Animals campaigner Ashley Fruno says “We were shocked that our event was stopped, as all we were doing was advocating for kindness and reminding APEC leaders and delegates that animal agriculture is a leading cause of climate change.”

About two hundred protesters trying to march on the venues for APEC meetings are blocked by riot police.

Security is very tight in the Philippines capital as world leaders meet for two days as part of the APEC summit.

Protesters jostled with police and burnt a mock U.S. flag.

Vincent Crisostomo of anti-globalization group Anakbayan says “APEC is an enemy of the Filipino people.”