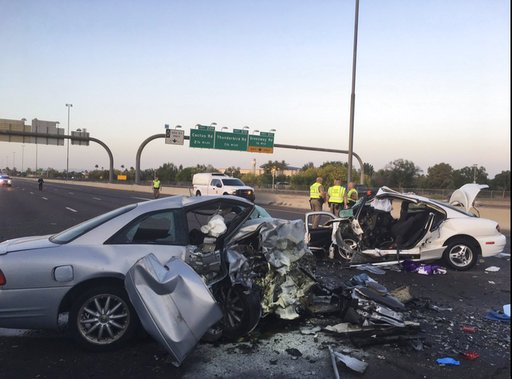 This photo provided by the Arizona Department of Public Safety shows the mangled remains of cars involved in a fatal accident on the Northbound Interstate 17 in Phoenix, Ariz. on Friday, April 14, 2017. Northbound Interstate 17 was closed following the wrong-way crash that authorities say involved two vehicles and killed three people. (Arizona Department of Public Safety via AP)

PHOENIX (AP) — An early morning wrong-way collision on a Phoenix freeway killed two university students and another young adult, the latest such wreck that has state officials trying to find ways to prevent the resulting deaths and injuries typically caused by impairment.

The wrong-way driver was a 22-year-old man driving a car with Colorado license plates and the women were ages 19 and 20, apparently sisters and in a car with North Carolina plates, said spokesman Raul Garcia of the Arizona Department of Public Safety.

Garcia said the identities of those killed in the wreck weren’t immediately available. But Grand Canyon University spokesman Bob Romantic said two of those killed were students at the private Christian university and that they were in separate vehicles involved in the crash on Interstate 17 shortly after 2 a.m. Friday.

Romantic said the university, out of respect for the privacy of the families, would not be releasing information about the students.

It’s not immediately known whether the wrong-way driver was impaired, and that will be determined by toxicology tests conducted by the Maricopa County Medical Examiner’s Office, Garcia said.

Also, drivers should stay alert, avoid distractions and plan how they would respond in a split second to a hazard such as an oncoming wrong-way vehicle, Garcia said.

As it also tries to prevent wrong-way crashes, the Arizona Department of Transportation has installed hundreds of larger and lower “wrong way” and “do not enter” signs on more than 100 freeway ramps.

The agency is also exploring technology that might detect wrong-way drivers and alert authorities and other motorists.

The Arizona Department of Transportation plans later this year to install a pilot detection and warning system on I-17 and ramps, agency spokesman Steve Elliott said.

The system will send alerts to law enforcement and transportation department traffic operators, post warnings on overheard message boards, provide location updates on wrong-way drivers and trigger flashing warning signs at exit ramps to try “to get the wrong-way driver to self-correct,” ADOT said in a statement released by Elliott.

“Ultimately, engineering, along with enforcement, can be only one part of the response to wrong-way driving because this is first and foremost a driver behavior issue,” the statement added.

ADOT began planning the pilot project in late 2015 following a rash of wrong-way crashes, including ones that killed an off-duty Mesa police officer and a young Mesa couple.

Lee said figures for wrong-way crashes on just Phoenix-area freeways were not immediately available but that Phoenix-area collisions account for most statewide.

Metro Phoenix has roughly two-thirds of Arizona’s population and has numerous freeways, including sections of I-17 and Interstate 10. Lee cautioned that the statewide figures may include collisions in which vehicles spun around after being in a wreck.