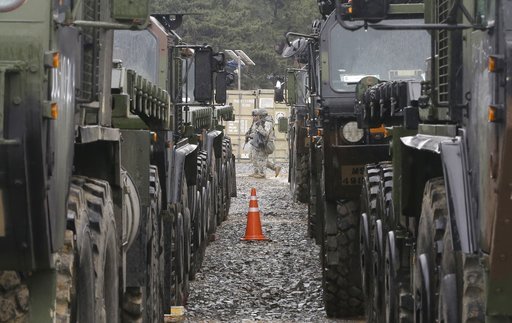 WASHINGTON (AP) — The Trump administration has settled on its North Korea strategy after a two-month review: “Maximum pressure and engagement.”

U.S. officials said Friday the president’s advisers weighed a range of ideas for how to get North Korea to abandon its nuclear program, including military options and trying to overthrow the isolated communist dictatorship’s leadership. At the other end of the spectrum, they looked at the notion of accepting North Korea as a nuclear state.

In the end, however, they settled on a policy that appears to represent continuity.

The administration’s emphasis, the officials said, will be on increasing pressure on Pyongyang with the help of China, North Korea’s dominant trade partner. The officials weren’t authorized to speak publicly on the results of the policy review and requested anonymity.

The new strategy will be deployed at a time of escalating tensions on the Korean Peninsula. U.S., South Korean and other officials are closely monitoring the North amid indications it could conduct another missile test or nuclear explosion to coincide with an important national anniversary this weekend.

An influential Washington think tank estimated Friday that North Korea could already have up to 30 bombs.

The Institute for Science and International Security cited a worrying increase in North Korea’s nuclear program, but said the arsenal may only have been as large as 13 atomic weapons at the end of 2016. Its research suggested a range between 10 and 16 such weapons two years earlier. The institute’s estimates are based on what it believes the North has produced in plutonium and weapons-grade uranium. The margins represent uncertainty as to whether North Korea has one or two uranium enrichment facilities.

The North has owned up to one such facility, at its Nyongbyon nuclear complex, but the U.S. government assumes it has more.

“The bottom line is that North Korea has an improving nuclear weapons arsenal,” said David Albright, the institute’s president.

He said the North may have a handful of plutonium-based warheads it can mount on medium-range ballistic missiles capable of reaching South Korea and Japan. But it’s doubtful the North is currently able to build reliable, survivable warheads for an intercontinental ballistic missile that can strike the U.S. mainland, he said.

As for the Trump administration’s policy, the U.S. officials emphasized that no engagement of North Korea is currently taking place. Although China advocates for diplomatic outreach, the focus for now is on pressure. 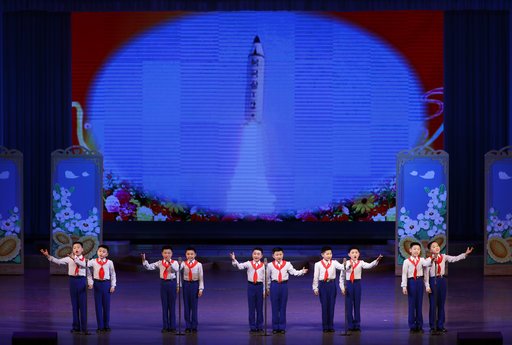 North Korean school children perform at the Mangyongdae Children’s Palace while an image of a space launch vehicle is projected on a screen on Friday, April 14, 2017, in Pyongyang, North Korea. Amid rising regional tensions, Pyongyang residents have been preparing for North Korea’s most important holiday: the 105th birth anniversary of Kim Il Sung, the country’s late founder and grandfather of current ruler Kim Jong Un. (AP Photo/Wong Maye-E)

The officials said the goal of engagement would have to be North Korea’s denuclearization. It cannot lead to an arms control agreement or reduction of the North’s atomic arsenal that would imply American acceptance of North Korea as a nuclear power.

The officials are hopeful China and Russia would agree to tighter U.N. sanctions on North Korea if it conducts another nuclear test. They pointed to a recent editorial in a state-run Chinese newspaper advocating tighter restrictions on selling oil to North Korea.

Beijing’s decision earlier this year to cut off coal imports from North Korea also are being seen as a hopeful sign. Coal sales are an important source of revenue for Kim Jong Un’s government, and the U.S. says China has turned back some shipments in recent days. Russia and China are critical to any pressure campaign on North Korea because they both hold veto power on the U.N. Security Council.

In an interview Friday with The Associated Press, North Korea’s Vice Minister Han Song Ryol said President Donald Trump’s tough tweets toward Pyongyang were adding to a “vicious cycle” of tensions. Han said if the U.S. shows any sign of “reckless” military aggression, Pyongyang is ready to launch a pre-emptive strike of its own.

Trump, who last week acted unilaterally in ordering a cruise missile strike on Syria, has been using America’s military might to send a message to Kim. An aircraft carrier, the USS Carl Vinson, is heading to waters off Korea in a show of force. Trump has repeatedly issued ambiguous threats that if Beijing isn’t willing to do more to squeeze the North, the U.S. might take the matter into its own hands.

But a U.S. military official, who requested anonymity to discuss planning, said the U.S. doesn’t intend to use military force against North Korea in response to either a nuclear test or a missile launch. The official said plans could change in the unlikely event a North Korean missile targets South Korea, Japan or U.S. territory.