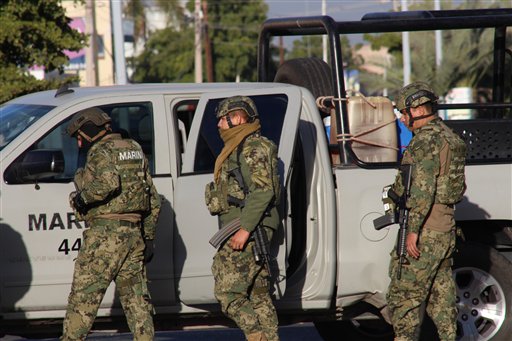 Mexican Navy marines stand next to their vehicle after they participated in the recapture of Mexico's most wanted drug lord, Joaquin "El Chapo" Guzman in the city of Los Mochis, Mexico, Friday, Jan. 08, 2016. The worlds most-wanted drug lord was captured for a third time, as Mexican marines staged heavily-armed raids that caught drug lord Joaquin "El Chapo" Guzman six months after he escaped from a maximum security prison. (AP Photo/Mahatma Millan)

MEXICO CITY (AP) — The world’s most-wanted drug lord was recaptured in a daring raid by Mexican marines Friday, six months after he fled through a tunnel from a maximum security prison in a made-for-Hollywood escape that deeply embarrassed the government and strained ties with the United States.

Few had thought Guzman would be taken alive, and few now believe Mexico will want to try to hold him a third time in Mexican prisons. He escaped from maximum-security facilities in 2001 and on July 11, 2015, the second breakout especially humiliating for the Pena Nieto administration, which only held him for less than 18 months.

The capture had top Mexican officials at a Foreign Ministry event gleefully embracing and breaking into a spontaneous rendition of the national anthem after Interior Secretary Miguel Osorio Chong delivered the news.

No sooner than Guzman was apprehended, calls started for his immediate extradition to the U.S., including from a Republican presidential candidate, Florida Sen. Marco Rubio.

“Given that ‘El Chapo’ has already escaped from Mexican prison twice, this third opportunity to bring him to justice cannot be squandered,” Rubio said.

The United States filed requests for extradition for Guzman on June 25, before he escaped from prison. In September, a judge issued a second provisional arrest warrant on U.S. charges of organized crime, money laundering drug trafficking, homicide and others. But Guzman’s lawyers already filed appeals and received injunctions that could substantially delay the process.

Mexico said after the 2014 capture of the cartel boss that he would be tried in his home country first, with officials promising they would hang on to him. After his escape in July, the talk on Friday about keeping and trying Guzman almost as a matter of national pride wasn’t so overt.

“It would be better for the Americans to take him away,” said Mexican security analysis Raul Benitez.

Pena Nieto said he personally issued the order to recapture Guzman and heaped praise on Mexican agencies for their coordinated effort. “Careful and intensive intelligence work was carried out for months” leading up to the arrest, he said.

Pena Nieto gave a brief live message Friday afternoon that focused heavily on touting the competency of his administration, which has suffered a series of embarrassments and scandals in the first half of his presidency.

“The arrest of today is very important for the government of Mexico. It shows that the public can have confidence in its institutions,” Pena Nieto said. “Mexicans can count on a government decided and determined to build a better country.”

Guzman, a legendary figure in Mexico who went from a farmer’s son to the world’s top drug lord, was apprehended after a shootout between gunmen and Mexican marines at a home in an upscale neighborhood in Los Mochis, a seaside city in Guzman’s home state of Sinaloa.

Authorities first located Guzman several days ago, based on reports that he was in Los Mochis, said a Mexican law enforcement official who was not authorized to be quoted by name said.

The Mexican Navy said in a statement that marines raided a home after receiving a tip about armed men there. They were fired on from inside the structure, it said. Five suspects were killed and six others arrested. The marine’s injuries were not life threatening.

“You could hear intense gunfire and a helicopter; it was fierce,” said a neighbor, adding that the battle raged for three hours, starting at 4 a.m. She refused to be quoted by name in fear for her own safety.

Guzman may have been at the house and fled while his gunmen and bodyguards provided covering fire from the house, said a second federal law enforcement official, who also agreed to discuss the operation on condition of anonymity. Guzman was later captured at the hotel Doux, a low-rise modern building on the outskirts of town.

Some reports said he tried to escape through storm drains. In 2014, Guzman evaded capture by fleeing through a network of interconnected tunnels in the drainage system under Culiacan, the Sinaloa state capital.

Photos of the arms seized showed that two of the rifles were .50-caliber sniper guns, capable of penetrating most bullet-proof vests and cars. The grenade launcher was found loaded, with an extra round nearby. An assault rifle had a 40-mm grenade launcher and at least one grenade.

“The arrest is a significant achievement in our shared fight against transnational organized crime, violence, and drug trafficking,” the Drug Enforcement Administration said in a statement.

The U.S. Justice Department commended the Mexicans for their work as well. “I salute the Mexican law enforcement and military personnel who have worked tirelessly in recent months to bring Guzman to justice,” Attorney General Loretta Lynch said.

After his first capture in Guatemala in June 1993, Guzman was sentenced to 20 years in prison. He reportedly made his 2001 escape from the maximum security prison in a laundry cart, though some have discounted that version.

His second escape last July was even more audacious. He slipped down a hole in his shower stall in plain view of guards into a mile-long tunnel dug from a property outside the prison. The tunnel had ventilation, lights and a motorbike on rails, illustrating the extent to which corruption was involved in covering up the elaborate operation. Noise of the final breakthrough from the tunnel was obvious inside the prison, according a video of Guzman in his cell just before he escaped.

Mexico launched a huge manhunt and a couple of months later tracked him to the mountains of his home state, arresting a pilot who allegedly flew Guzman to the region hours after his escape. Guzman was said to have narrowly escaped an earlier capture and injured a leg and his face while fleeing marines in the rugged terrain.

This story has been corrected to show that Guzman’s most recent escape was six months ago.