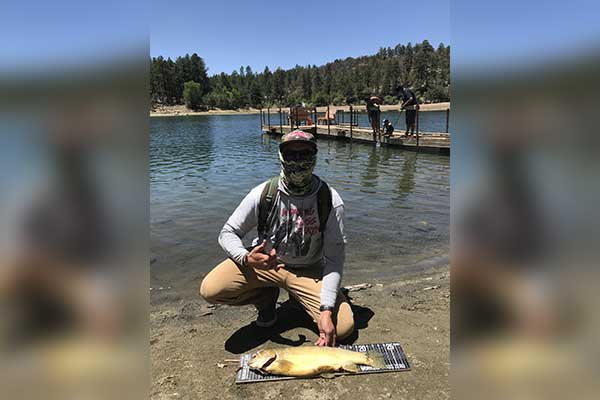 PHOENIX — David Worsham wasn’t at Prescott’s Goldwater Lake on Saturday, June 2 for the family fishing event or even the stocked rainbow trout. He was there to catch big bass.

Yet the Avondale, Ariz. resident left with a potential state and world record Gila trout.

Worsham caught a 23-inch, 5.12-pound Gila trout that is in the process of certification as an Arizona state record.

“It kind of fought like a catfish at first,” Worsham said. “Once it started getting closer to shore it started peeling drag. I loosened the drag so she could run a little bit. I didn’t want to horse it to shore and chance it breaking off.”

This unique fish species is one of two native trout species to Arizona.

Worsham said he kept the fish.

He caught the behemoth Gila on a lipless crankbait. The rest of his rig consisted of a Megabass Levante Diablo Spec-R rod, a Daiwa Tatula 100 baitcasting reel and 15-pound fluorocarbon line. He said he was fishing one of Goldwater’s coves for big bass when he noticed a lunker cruising from deep water to the shallows and back. He switched from a swimbait to the lipless crankbait and hooked the Gila.

Of course, Worsham’s fish is heavier than both. His catch has not yet been certified by the IGFA.

AZGFD is stocking more Gila trout this month into Goldwater Lake and the West Fork of Oak Creek.