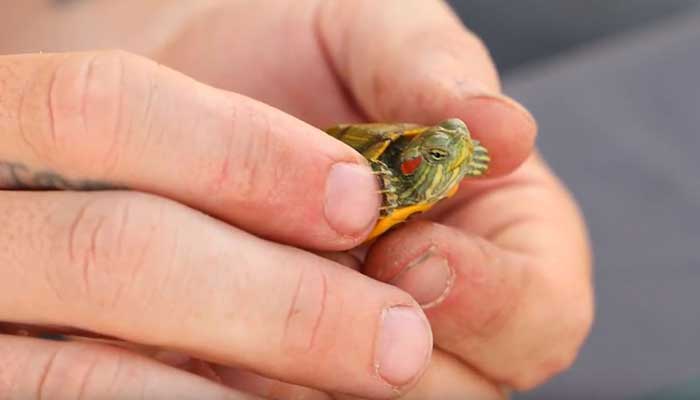 PHOENIX — Each year dozens of unwanted pet turtles are irresponsibly released into the pond at the entrance to the Phoenix Zoo where they greet visitors. Yet over time they will compete with native Arizona wildlife for limited food and habitat.
The Arizona Game and Fish Department, in coordination with the Phoenix Zoo,Turtle and Tortoise Preservation Group and Phoenix Herpetological Society, recently trapped dozens of non-native turtles at the zoo. The event is part of an ongoing project to reduce this non-native turtle population and prevent them from entering adjacent waterways.

During the annual trapping event, which ran from May 18 to 20, AZGFD biologists captured 22 turtles in the pond near the zoo’s entrance. Meanwhile, 40 other turtles were captured and processed from traps placed at two other ponds within the zoo.
“It’s never a good idea to release pet turtles into the wild,” said Cristina Jones, AZGFD turtles project coordinator. “When released, pet turtles can prey upon our native aquatic wildlife and because nonnative turtles are so much larger than our native mud turtles, they can easily  outcompete our native turtles for food and displace them from habitat. In addition, they can introduce diseases that could truly decimate local aquatic wildlife. Through this partnership, AZGFD works to identify and remove non-native turtles and to educate the public about turtles – and being a responsible pet turtle owner.”
Those wanting to surrender an unwanted pet turtle should contact an organization such as the Turtle and Tortoise Preservation Group, which will take in and rehome the animals.
Turtles were trapped inside baited hoop nets and measured, weighed, their sex determined, species verified and marked for identification. At this year’s turtle trapping, 62 turtles (45 male and 17 female) were captured. These included 54 pond sliders, six painted turtles, one common map turtle and an eastern musk turtle (commonly known as a “stinkpot”).
Every year, it is estimated that hundreds of unwanted pet turtles are released into public and community lakes by their owners. The first non-native species turtle trapping was held at the Phoenix Zoo in 1999. Since then, more than 970 individual turtles, representing 19 species, have been captured and nearly 580 have been removed.
In 2017, 22 turtles were caught during the trapping in the pond at the Zoo’s entrance, 91 others  were captured at two other ponds within the zoo.
The trapping event was held in conjunction with World Turtle Day on May 23 and included an educator’s workshop, which provided professional development through Game and Fish Department’s Focus Wild education program. World Turtle Day aims to promote turtle conservation efforts by bringing attention to and respect for turtles and tortoises, and encouraging human action to help them survive and thrive.