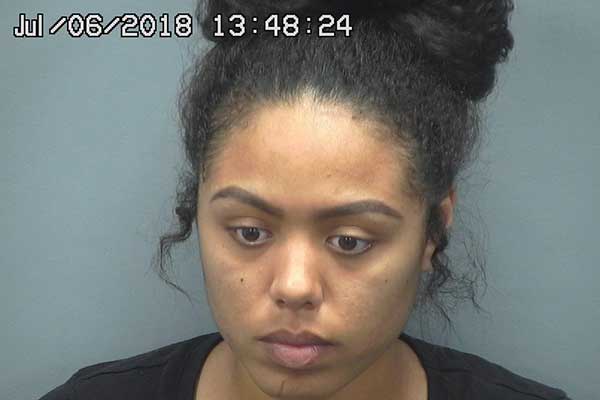 SAFFORD – Friday afternoon two juveniles found themselves in the wrong place at the wrong time when an officer came across the vehicle they were in, parked in the 1000 block of 26th Street near a group of mesquite trees.

As the officer approached the vehicle, a female could be seen in the passenger seat along with two other occupants. An immediate smell of  burnt marijuana was also noticed by authorities and continued to get stronger as they approached the vehicle. The occupants were asked if anyone had a medical marijuana card, to which they all replied that they did not. The woman in the drivers seat, identified as Shelby Apodaca, along with the two juveniles were placed in the patrol vehicle but not handcuffed.

A search of the vehicle revealed a total of two baggies containing a green leafy substance found under the drivers seat. A multi-colored glass pipe was located near the baggies, which had a burnt black substance in the bowl. The other two baggies were found inside of a handbag in the center console. After the substance tested positive for marijuana, the officer had Apodaca exit the patrol vehicle.  She stated that all the contraband belonged to her and that the two juveniles had nothing to do with what was inside of the vehicle. While the officer was speaking with Apodaca, it was discovered that she had an outstanding warrant for her arrest.  Apodaca was later transported to the Graham Jail and booked for the warrant and also cited for possession of marijuana and possession of drug paraphernalia.

One of the juveniles reported to the officer that Apodaca had just picked her up from her residence but she did not know Apodaca. The other juvenile was her friend. While they were sitting there, the juvenile knew something was wrong but did not know what. She could also smell the marijuana but stated it was not hers. She was released to her mother on scene.

The other juvenile confirmed that Apodaca was a relative but she and her friend had nothing to do with the marijuana. A Thatcher officer assisted transporting the juvenile to her grandmother’s residence at the request of her mother.

A friend of Apodaca took custody of the vehicle on scene.