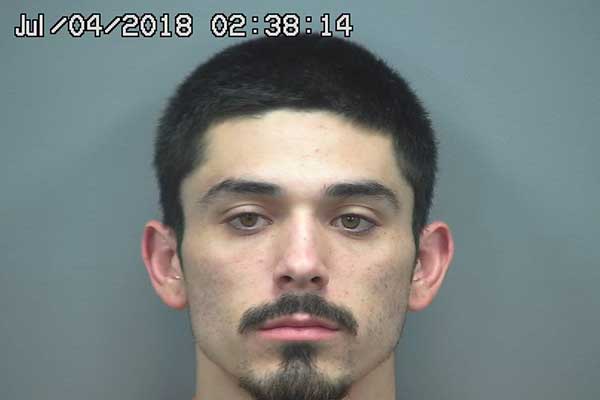 SAFFORD – On July 4th, an officer driving down Relation Street observed Angel Montano driving a vehicle with a female passenger as they passed each other on the road. The officer had prior knowledge that Montano’s driving status was suspended, and that on more than one occasion he has fled from local police in vehicles as well as on foot, successfully evading police.

The officer turned around to approach the vehicle as it quickly entered the parking lot of the convenience store on 1st Avenue. The vehicle parked at the gas pumps and Montano got out of the vehicle and headed toward the store. When Montano looked at the marked patrol vehicle, he quickly ran into the store. The officer pursued Montano as he ran through the store towards the restrooms. Police apprehended and handcuffed Montano before he made it to the restrooms and he was found with his hand in his front pocket which contained a piece of tin foil rolled into a ball with a black tar-like substance inside, recognized by the officer as heroin.  Montano immediately stated to the officer that it was not his. He was placed in the back of the patrol vehicle.

Authorities spoke with the female passenger who stated she did not have a valid driver’s license and that she had asked Montano to take her for a ride. She also stated she had “told him not to be riding dirty”.

Behind the driver’s seat, a backpack was found with several items of drug paraphernalia, including a glass smoking device with white residue, a digital scale with brown residue, a cut plastic tube with brown residue inside, a razor blade knife with residue on the blade, a butane torch, and two additional pieces of tin foil rolled into a ball. One of the balls contained a usable amount of heroin inside of it, the other had brown residue with burn marks. When the woman was asked about the backpack, she stated it was not hers, that it belonged to Montano. He stated, however, that it did not belong to him and that “what’s on me, is on me”. When the officer asked why he ran, Montano stated he didn’t know. He reportedly said, “everytime I see you guys I just run. It’s just what I do”.

The vehicle was towed from the scene and Montano was booked into the Graham County Jail for possession of a narcotic drug, possession of drug paraphernalia, and driving with license suspended/revoked.