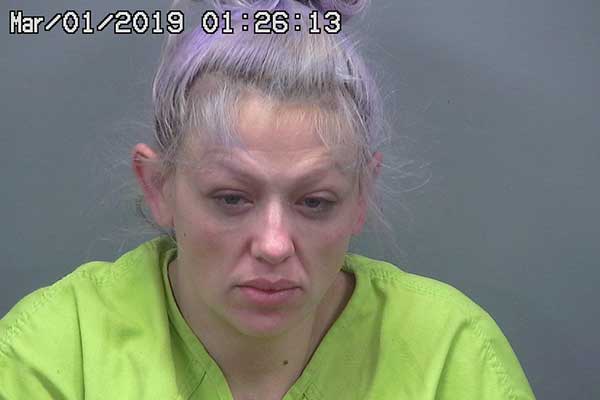 SAFFORD – Authorities were dispatched to a motel last Thursday around 4:30pm regarding a woman in a room who refused to pay for the room. The woman had paid cash for the room the day before but had not checked out by noon and refused to give any credit card information. An officer made contact with the woman at the room where she gave the officer a name and date of birth but while doing so she looked away, which gave the officer the feeling she was lying about her identity. She told the officer she was unhappy with the service and was planning on leaving.

During this time a man in the room was reportedly acting as though he was in a hurry to leave and told the woman he was going to put something in the car. The woman said that she did not know the male; that he was a friend of a friend who was going to give her a ride. The man was recognized by the officer as Timothy McClellan from previous police contact. After speaking with the woman, the officer went to speak with the front clerk and view the itinerary of the room.

The woman had checked in under the name Dixie Williford, which was similar to the name she had given authorities. Hotel personnel reported that McClellan had been in the lobby prior to police arriving, and had been pacing the floor making comments about the vicodin pills he had taken had made him “all hot” and his bandages were falling off his face and hands. The officers had noticed while speaking with the woman, that McClellan had a black eye as well as scrapes on his hands and arms. At that time, the officer could see McClellan and the female leaving in a car heading west on Highway 70. A deputy had arrived and was asked to keep the vehicle in sight while the hotel room was being checked for damage.

The officer left the motel and drove to a gas station a few blocks away where the deputy had followed the car the woman and McClellan were driving. The deputy was parked parallel to the vehicle. McClellan was washing the windows when the officer approached the passenger window to speak with the woman. The woman said that she did not want to speak with the officer, she had not done anything wrong and refused to unlock or open the car door.  The officer told her that he believed she had give him a false name and that was a criminal offense. She continued to refuse to open the door.

Another officer was called to the scene as the officer instructed McClellan to unlock the vehicle door. McClellan stated he would not unlock the door because the female who he admitted to not knowing, was “stressed.” At some point, the woman opened the door and exited the vehicle as she placed a black jacket she had been clutching to cover a large purse and other items on the floorboards. The officer asked the woman several time if she had any forms of identification, which she continued to claim she did not have. The officer could see a total of three wallets exposed in the purse that had become uncovered. The woman grabbed a pouch from the purse as she denied having identification and opened it for the officer to see. However, the officer could see a partial Arizona license inside among a roll of money. When the officer mentioned seeing the ID, the female quickly tossed it back into the vehicle.

At this point, the woman was placed under arrest. She actively struggled with officers by pulling away in an attempt to get back in the vehicle. The officers gained control, and the female was handcuffed. The ID was retrieved which showed the name Dixie Williford. The photo matched the identity of the woman in handcuffs. Dispatch confirmed Williford had three warrants out of Ajo. She was secured in the deputy’s vehicle. While the officer was retrieving Williford’s belongings, a syringe, which had dark brown colored liquid inside was found along with a silver eating spoon with cotton on the top area and burn marks on the bottom, a hand size torch lighter.

While looking through the contraband, the officer heard shouting from the back area of the vehicle. An officer and deputy were struggling with McClellan to place him in handcuffs, because he had been  reaching into his pants through the zipper, and it was believed he was attempting to hide or destroy evidence. Officers located a blue nylon tie bag on the ground beneath McClellan ‘s feet. Inside the bag was an unused syringe, a clear plastic tube with two end caps, and the bottom of an aluminum soda can. When the officer opened the plastic tube, it smelled like the odor of vinegar. Brown streaks and residue could also be seen inside.

When the officer spoke with Williford, she stated none of the items located in the vehicle belonged to her. Williford told the officer she was sorry for lying about her name and she knew she had warrants. Williford stated she used to use heroin but she doesn’t anymore, and before today she did not know McClellan and she was paying him $100 to take her to Tucson. She said that she was planning on taking care of her Ajo warrants. The officer could see at that time Williford had fresh puncture/tract marks on her arm despite her report of not using heroin 4-5 days prior. Williford was later booked in the Graham County Jail where it was discovered she had two local warrants as well.

McClellan denied ownership of the blue bag and reported he doesn’t use heroin anymore, but he was planning on re-lapsing on this trip with Williford. McClellan stated he doesn’t use syringes , he only smokes or snorts heroin. McClellan confirmed Williford was paying him $100 to take her to Tucson but reported he did not know why she was going. After authorities checked McClellan’s arm for tract marks, but none were found, he was cited for possessing drug paraphernalia and released.