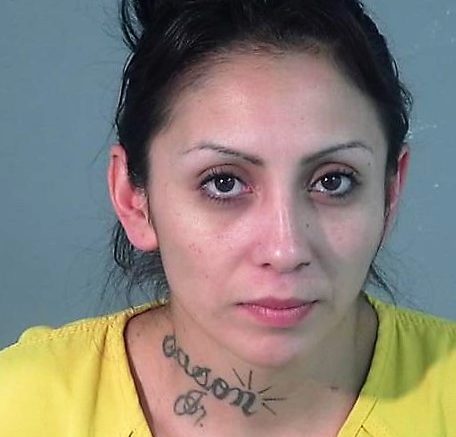 Contributed Photo/Courtesy GCSO: Daniella Chapman was found to have hidden heroin and methamphetamine inside herself.

SAFFORD – There’s a reason those who are incarcerated face being subjected to strip and full body cavity searches.

On Friday, a woman was found to have hidden heroin and methamphetamine in a condom inserted into her vagina.

Daniella Monique Chapman, 28, was arrested on a warrant out of Justice of the Peace Precinct 1 for failure to appear regarding a reckless driving complaint.

According to a Safford Police report, Chapman was seen walking south on U.S. Highway 191 at about 2:19 p.m. by an officer on patrol. The officer recognized Chapman and confirmed the warrant for her arrest.

Chapman initially denied possessing anything illegal, but while changing into jail attire, a female detention officer became suspicious Chapman might be concealing something.

After being warned that bringing contraband into the jail was a Class-2 Felony and that the officer would take her to the hospital for a full body examination, Chapman allegedly admitted to hiding drugs in her person.

A female detention officer then went into the Safford Police Department’s lavatory with Chapman and supervised as she removed the drugs. Police seized approximately 3.5 grams of heroin in five small plastic seals and 1.5 grams of methamphetamine in another seal. The seals were all bundled together inside a condom.

The drugs were catalogued for laboratory testing purposes and Chapman was booked into the jail on her warrant. Charges of possession of a narcotic drug, possession of a dangerous drug and possession of drug paraphernalia are pending review from the Graham County Attorney’s Office.