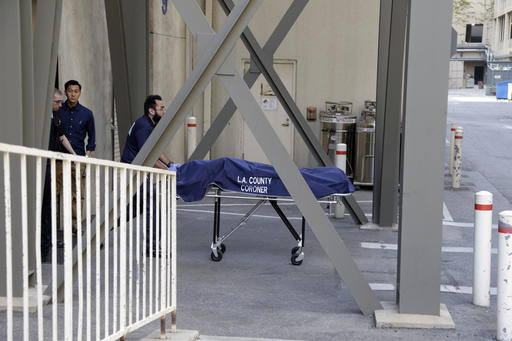 Los Angeles County Department of Medical Examiner-Coroner officials remove a body at the scene of a fatal shooting at the University of California, Los Angeles, Wednesday, June 1, 2016, in Los Angeles. About two hours after the first 911 call came in around 10 a.m., with the center of campus still saturated with officers, Los Angeles Police Chief Charlie Beck said it was a murder-suicide and declared the threat over. Two men were dead in an engineering building office, and authorities found a gun and what might be a suicide note, he said. (AP Photo/Nick Ut)

LOS ANGELES (AP) — The man who carried out a murder-suicide at UCLA left a “kill list” at his Minnesota home that led authorities to find a woman’s body, Police Chief Charlie Beck said Thursday.

When authorities searched Sarkar’s Minnesota home, they found a “kill list” with the names of Klug, another UCLA professor and a woman, Beck said.

The woman was found shot dead in her home in a nearby Minnesota town, he said. Beck said he could not release that woman’s name. The other professor on the list is OK.

Beck said it appeared mental issues were involved and that Sarkar’s dispute with Klug was tied to Sarkar thinking the professor released intellectual property that harmed Sarkar.

Police asked for the public’s help to find the car Sarkar drove to Los Angeles, a 2003 Nissan Sentra with the license plate 720KTW.

Sarkar is listed on a UCLA website as a member of a computational biomechanics research group run by Klug, a professor of mechanical engineering.

Classes at the University of California, Los Angeles campus resumed Thursday for most of the school, except for the engineering department, whose students and faculty will return Monday.

Klug was a devoted family man and a superb teacher, said a collaborator, UCLA Professor Alan Garfinkel. The two worked together to build a computer model of the heart, a “50 million variable ‘virtual heart’ that could be used to test drugs.”

“Bill was an absolutely wonderful man, just the nicest guy you would ever want to meet,” Garfinkel said.

Initial reports from the scene set off widespread fears of an attempted mass shooting on campus, bringing a response of hundreds of heavily armed officers. Groups of them stormed into buildings that were locked down and cleared hallways as police helicopters hovered overhead.

Advised by university text alerts to turn off lights and lock the doors where they were, many students let friends and family know they were safe in social media posts. Some described frantic evacuation scenes, while others wrote that their doors weren’t locking and posted photos of photocopiers and foosball tables they used as barricades.

After about two hours, Beck said it was a murder-suicide and declared the threat over. Two men were dead, and authorities found a gun and what might be a suicide note, he said.

It was the week before final exams at UCLA, whose 43,000 students make it the largest campus in the University of California system.

Those locked down inside classrooms described a nervous calm. Some said they had to rig the doors closed with whatever was at hand because they would not lock.

Umar Rehman, 21, was in a math sciences classroom adjacent to Engineering IV, the building where the shooting took place. The buildings are connected by walkway bridges near the center of the 419-acre campus.

“We kept our eye on the door. We knew that somebody eventually could come,” he said, acknowledging the terror he felt.

The door would not lock and those in the room devised a plan to hold it closed using a belt and crowbar, and demand ID from anyone who tried to get in.

Scott Waugh, an executive vice chancellor and provost, said the university would look into concerns about doors that would not lock.

One student who spent hours sheltering in a building did the same thing almost exactly two years ago when he was locked down in a dorm at UC Santa Barbara during a shooting rampage in the surrounding neighborhood that left six students dead and 13 people wounded.

Jeremy Peschard, 21, said it was scary and “eerily similar” but also that having been through the feeling of crisis before left him almost numb.

“I just felt a little bit less shocked, a little bit less taken aback by the reality of an active shooter on a college campus,” he told The Associated Press in an email. “Because I feel like this is the day and age we’re living in, that college campus shootings have genuinely become a normalized threat, almost like a natural disaster, except this type of destruction isn’t natural. It’s just really sad.”

UCLA’s commencement ceremonies and end-of-year events will now include mourning Klug, who was a devout Christian and a regular figure in organizing campus spiritual life.

Peter Gianusso, who headed the El Segundo Little League where Klug coached, said he “exemplified what Little League was all about: character, courage and loyalty.”