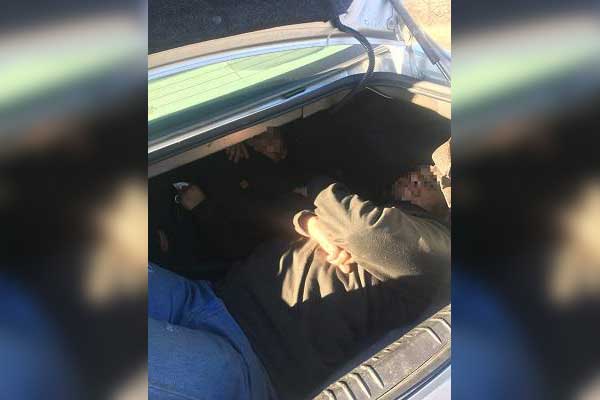 TUCSON, Ariz. – Border Patrol agents assigned to the I-19 immigration checkpoint near Amado arrested a Phoenix woman, Thursday afternoon, who led them on a brief vehicle pursuit with two illegal aliens concealed in the trunk of her car.

Agents working the primary inspection lane at the immigration checkpoint encountered a Chevy sedan and referred the 28-year-old driver for secondary inspection. Instead of pulling into the inspection area, the driver accelerated and merged onto the highway, leading agents on a pursuit for approximately one mile.

The driver stopped the vehicle at the Agua Linda Road on-ramp to I-19 and was arrested without further incident.  During a search of the vehicle, agents discovered two illegal aliens from Mexico concealed in the trunk.

The driver is being charged with human smuggling and will remain in custody pending a disposition in the case. The two illegal aliens, one of which was previously removed from the country, will be processed for immigration violations.

As temperatures continue to rise, Border Patrol officials warn that Arizona’s high temperatures can kill humans riding in the trunk of a car. Other dangers include carbon monoxide poisoning and the risk of serious injury or death from a vehicle collision.