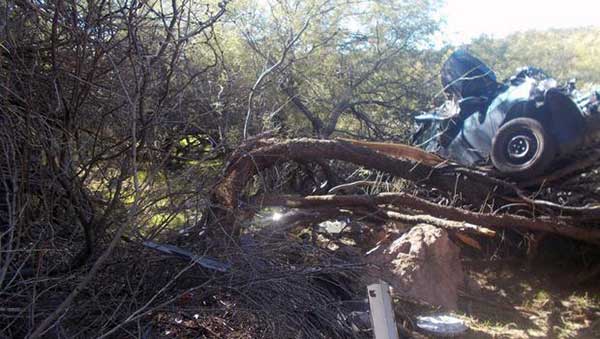 An ADOT crew, rancher and state trooper discovered the injured crash victim and helped save her life

Wickenburg, Ariz. — On Friday, October 12, 2018, a 53-year-old woman lost control of her vehicle along US 60 near milepost 117. The vehicle traveled through the right-of-way fence and dropped 50 feet, landing in a mesquite tree where it remained suspended above the ground. There were no apparent witnesses to the crash and it would be six days before the woman would be discovered by authorities.

On Thursday, October 18, an Arizona Department of Transportation (ADOT) maintenance crew and rancher were working to corral a cow along US 60 when they noticed a break in the fence near the roadway. When they stood by the damaged fence, they observed a mangled vehicle lodged in a mesquite tree about 50 feet down from the roadway. ADOT notified the Arizona Department of Public Safety (AZDPS) and a trooper was sent to the scene.

Trooper Caleb Hiegel, ADOT road maintenance crew members Zach Moralez and Josh Miller, and rancher Dave Moralez searched the car and did not locate anyone. Instead, they found human tracks leading towards the Hassayampa river bed. Trooper Hiegel and Zach Moralez followed the tracks for 500 yards and discovered a severely dehydrated woman with serious injuries. They began treating the woman and called for a medical helicopter.

The woman told Trooper Hiegel she lost control of her vehicle six days earlier and remained inside of the vehicle for several days before climbing out. Once she climbed out, she walked towards the railroad tracks in the area with the hope of being discovered. She never made it because of her weakened physical state.

The woman was airlifted to a valley hospital.

Colonel Frank Milstead, AZDPS Director, said, “The diligence of the ADOT crew and teamwork of everyone involved is exemplary and to be commended. Due to their outstanding efforts, this woman’s life was saved.”