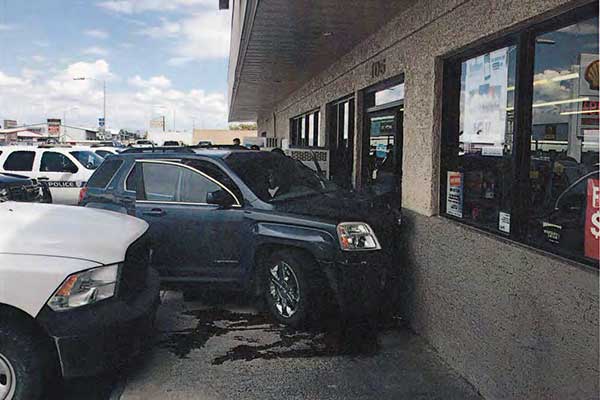 SAFFORD – Last Wednesday, authorities arrived at a convenience store on Highway 70 in reference to a vehicle that had collided into the building. An officer could see as they arrived, a small SUV on the sidewalk at the front entrance to the store. The front of the vehicle had gone through the threshold at the entrance of the store and the front of the vehicle was resting against the glass doors at the entrance of the building. The front doors to the store were heavily damaged.

The female driver was being treated by Lifeline Ambulance personal and was assisted into the ambulance. She stated to the officer that she was attempting to park and meant to hit the brake, but accidentally pressed the accelerator. She reported she was unsure why she applied the accelerator. The passenger was the woman’s husband, who reported his wife entered the parking lot and was attempting to park the vehicle when she failed to slow down and struck the building. The woman was transported to the Mount Graham Regional Medical Center for additional treatment and the vehicle was towed from the scene.