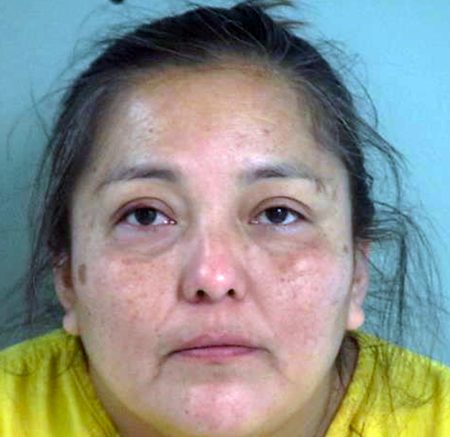 Contributed Photo/Courtesy GCSO: Rajean Kootswatewa was booked into the Graham County Jail on Sunday after allegedly assaulting her husband for eating corn.

SAFFORD – A man was allegedly assaulted by his wife at Walmart on Sunday for eating a piece of corn.

An officer was dispatched to the Walmart at 755 S. 20th Ave. at about 7:42 p.m. regarding an issue with a man and a woman in a car. Once there, the officer located an intoxicated man who was bleeding from his nose and had a cut on his neck. The officer noted that, while the man was heavily under the influence of alcohol, he was able to deny medical attention.

The woman, Rajean Heather Kootswatewa, 40, of Tuba City, Ariz., said the victim was her husband and that they were spending the night in their car because he had work in the morning. She said they were eating dinner when she became upset because he ate a piece of corn.

The ill-fated cob ingestion created an argument that escalated into Kootswatewa striking her husband while holding her car keys. The action is taught as a basic self-defense move for women who feel threatened as they return to vehicles in parking lots and other instances.

Since the action against her husband was seemingly unprovoked by any need to defend herself and because she freely admitted to striking him, Kootswatewa was arrested and booked into the Graham County Jail. She then appeared in front of Judge D. Corey Sanders in Safford Municipal Court the following day for her arraignment on one charge of assault/domestic violence. The court case is ongoing.