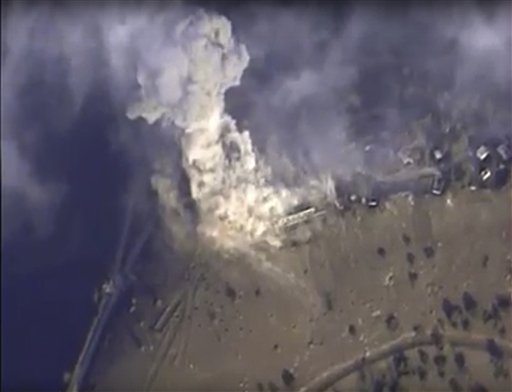 FILE - This file photo made from the footage taken from Russian Defense Ministry official web site on Monday, Nov. 2, 2015 shows a target hit during s Russian air raid in Syria. The tide of global rage against the Islamic State group lends greater urgency to ending the jihadis ability to operate at will from a base in war-torn Syria. That momentum could also force a reevaluation of what to do about President Bashar Assads future and puts a renewed focus on the position of his key patrons, Russia and Iran. (AP Photo/ Russian Defense Ministry Press Service, File)

DUBAI, United Arab Emirates (AP) — The tide of global rage against the Islamic State group lends greater urgency to ending the jihadis’ ability to operate at will from a base in war-torn Syria. That momentum could also force a reevaluation of what to do about President Bashar Assad and puts a renewed focus on the position of his key patrons, Russia and Iran.

The Syrian leader has lost much of the country to IS and other groups in the four-year war; half the population has been displaced, many areas have been leveled, and masses of refugees are flooding Europe. Along the way, Assad’s brutal military response has made him persona non grata in most of the world.

Portraying himself as the only viable alternative to jihadi rule, Assad has labeled all his enemies “terrorists” — a designation that, in the wake of the recent attacks on civilians by IS, may find greater resonance.

“If we want peace, we have to find a way of getting along with Assad, at least in a transition period. … Roosevelt didn’t like Stalin, but he had to get a deal with him in order to defeat the Nazis, who were the greater evil,” Garcia-Margallo said.

Britain’s former military chief, Gen. David Richards, echoed that sentiment, saying in a BBC interview that a cease-fire in Syria could allow Assad and his military to take a leading role in battling IS.

The fact remains, though, that the United States and its allies don’t want to see Assad benefit from any effort to dislodge IS from territory it controls in Syria — unlike in Iraq, where the Baghdad government is considered legitimate by the world community.

A temporary reprieve is starting to seem more possible, setting the stage for what some observers suggest may be an arrangement in which Assad is part of a transition government that has a role in the priority of defeating IS — but then quietly makes way.

Russia and Iran would have to be a big part of engineering such a solution — but they have leverage.

Assad might well have fallen if not for the support of Hezbollah, the Iranian proxy militia based in neighboring Lebanon whose efforts in the past two months has been joined by an active Russian bombing campaign.

Both Iran and Russia are difficult to read and predict — and until now, both have backed Assad’s insistence that he stay in power through the rest of his official term, which runs until 2021.

But there are hints that Russia’s support may be wobbling even as it ramps up airstrikes against his enemies: Moscow made clear earlier this month it is not crucial that he stay.

A Syrian opposition figure familiar with the Russian position said Moscow’s military campaign aims to facilitate a diplomatic track by strengthening Assad’s position and weakening the rebels enough that they all agree to come to the table.

He said the Russians have come to the conclusion that there can be no long-term solution for Syria while Assad remains in power. The question, he said, is how to let go of Assad while safeguarding state institutions and the capital of Damascus. The Russians have yet to answer that, said the opposition figure, who spoke on condition of anonymity because he did not want to damage relations with Russia.

Russia has its own interests, wanting to keep its small naval facility at Tartous on the Mediterranean and remaining a player in greater Mideast affairs.

Iran, another major ally, wants to maintain a counterbalance to Israel and keep another Shiite ally in the region.

Iran has sent more advisers to Syria in recent weeks, as well as again reportedly dispatching Gen. Qassem Soleimani, who heads the elite Quds Force of the Revolutionary Guard. The country also has suffered increasing casualties from the war.

This week, Iranian Deputy Foreign Minister Hossein Amir Abdollahian reiterated Tehran’s support for the Syrian president, saying that “only Assad himself can decide on his participation or non-participation in (future) elections (and) it is only the people of Syria who can say whether they will vote for him or not,” according to the semi-official Fars news agency.

In a more ambiguous statement referencing Assad, Parliament Speaker Ali Larijani said that “limiting the regional crises to one person is a strategic mistake.”

For now, Iran believes anger over the Islamic State group will force the world to stick with Assad, said Karim Sadjadpour, a senior associate at the Carnegie Endowment for International Peace in Washington. However, Sadjadpour said Iranian officials also realize how much the civil war has stoked Sunni extremism.

“Syria has been a Pyrrhic victory for Iran,” he said. “They’ve succeeding in keeping Assad in power, but their desire to be the vanguard of the Islamic world has been irreparably damaged. Their image in the Sunni Arab world will likely be tainted for decades to come.”

The wheels are in motion for a process that could possibly usher Assad out. Foreign ministers of 19 countries met in Vienna after the Paris attacks and set a Jan. 1 deadline to start negotiations between Assad’s government and opposition groups for ending a conflict that has killed more than quarter of a million people. Diplomats hope to have a transitional government six months later, with U.N.-supervised elections within 18 months, although previous efforts have failed.

U.S. Secretary of State John Kerry told the BBC on Tuesday that pushing Assad out “has to be part of a transition if you’re going to end the war.”

But Assad is not likely to go willingly anytime soon. In an interview shown Wednesday night on Italian state television, the Syrian president said that no political process can begin while “terrorists” occupy his nation.

“Nothing can start before defeating the terrorists who occupy parts of Syria,” he said, adding that if Syria’s people want presidential elections “there will be no red line” against holding them.

Joshua Landis, a Syria expert and the director of the Center for Middle East Studies at the University of Oklahoma, isn’t so sure Russia and Iran are prepared to see Assad go.

Iran and Russia “can’t separate the Assad family from this regime,” he said. “The regime has been built around loyalty to the Assads. If you get rid of them, everything collapses.”