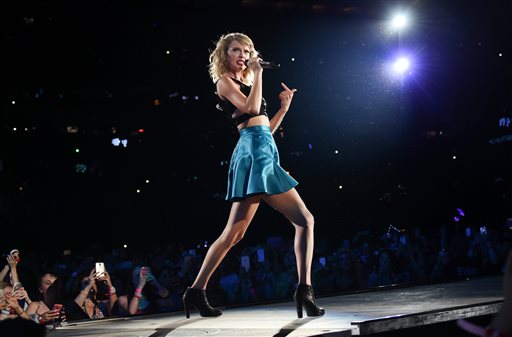 FILE - In this Friday, July 10, 2015, file photo, singer Taylor Swift performs during her "1989" world tour at MetLife Stadium in East Rutherford, N.J. Easily the most important pop star of today, now Swifts star power has reached even greater heights and stretched outside of music, thanks to her uber successful, star-studded 1989 World Tour. (Photo by Evan Agostini/Invision/AP, File)

NEW YORK (AP) — You could call Taylor Swift baby Oprah, and the stage is her version of Winfrey’s couch.

Easily the most important pop star of today, now Swift’s star power has reached even greater heights and stretched outside of music, thanks to her uber successful, star-studded 1989 World Tour.

In typical Swift fashion, she has invited fellow radio-friendly singers to join her onstage, including Nick Jonas, Jason Derulo, John Legend and close gal pals Selena Gomez and Lorde. But Swift, 25, has also shared her stage with iconic folk singer Joan Baez and breakthrough acts like The Weeknd and Fetty Wap, who sang his hit “Trap Queen,” a contemporary love song about cooking cocaine — among other things — with your lover.

And then there were the tour’s unorthodox moments: Ellen DeGeneres appeared onstage, Lisa Kudrow sang the memorable “Smelly Cat” from “Friends” at one show, and Kudrow’s former co-star, Matt LeBlanc, hit the stage at a show with Chris Rock. Julia Roberts even walked the stage like a runway as Swift performed her hit “Style.”

The pop star also invited athletes to join in on the fun, from Kobe Bryant to Serena Williams to the U.S. women’s soccer team, just days after they won the World Cup. And the models she calls her friends, from Gigi Hadid and Karlie Kloss.

“Interviewers always ask me how we ‘get’ these people to come to the shows to walk, and the truth is that everyone who has walked the catwalk at one of the shows was already there just to see the show. Usually I ask them in my pre-show meet and greet if they want to come out onstage, then I’ll explain to them how the stage/elevator lift works and we just wing it,” Swift said in an email to The Associated Press.

Many of her surprise guests have children who are die-hard Swifties.

“Joan Baez and Julia Roberts were both at my show in Santa Clara, and they were in my meet-and-greet room together. Julia is such a huge Joan fan and they were really hitting it off. I asked them if they wanted to walk out onstage together and Julia’s kids exploded into ‘PLEASE!!’ So that’s how that happened.”

Other guests on the 1989 World Tour, which kicked off in Tokyo in May, have included Justin Timberlake, Alanis Morissette, Natalie Maines of the Dixie Chicks, Sam Hunt, Wiz Khalifa and Beck.

“A lot of stars you can see maybe not wanting to kind of share the spotlight and not wanting to necessarily have other people up there with her, but Taylor’s thrilled to do that,” said Josh Duboff, who interviewed Swift for the cover of Vanity Fair’s September issue.

“She’s kind of excited to share the stage, which I think is kind of unique right now.”

Mary J. Blige, who sang her songs “Family Affair” and “Doubt” at the Staples Center in Los Angeles with Swift, said the singer “was someone I always loved way before she invited me to her show.”

“It’s amazing. She deserves it. She’s a giver. She’s a real sweetheart, big heart — so she’s getting back everything that she is,” the R&B diva said of Swift and her big-time tour guests. “People support her.”

At the same show, Swift performed a duet with Emmy winner and “Orange is the New Black” star Uzo Aduba, marking her second appearance on the singer’s tour.

Girl group Fifth Harmony said Swift learned the choreography for their latest hit, “Worth It,” in 20 minutes backstage before they performed in front of 60,000 screaming fans in Santa Clara, California.

“I was actually crying while we were performing. I really was and like, I couldn’t even sing my words correctly, especially when she came and stood right next to us,” band member Dinah Jane Hansen said. “I mean, come on. It’s Taylor Swift.”

Models also have been a part of the tour, which wraps Dec. 12 in Melbourne, Australia. They include Heidi Klum, Kendall Jenner, Lily Donaldson and Andreja Pejic. And there are also Swift’s close friends, like Lena Dunham and Hailee Steinfeld, who helped recreate her jam-packed “Bad Blood” music video at live shows alongside Kloss and Hadid.

“She’s a big inspiration to me. She knows that. We started our friendship because she was a really big fan of my music before anyone else. That’s a really cool thing,” said singer Ellie Goulding, who appears in the “Bad Blood” video. “I think she’s an inspiration to a lot of other female artists.”

Goulding has yet to join Swift onstage on her latest tour, but she’s ready: “That would be so much. Anything that involves a catwalk I would be into because I know I’ll never do a real catwalk.”

Swift has been a longtime supporter of her musical peers, and the Swift approval could help launch or boost a career. Ed Sheeran’s star power rose after Swift declared she loved his music on social media, introducing him to her feverish fan base. (She’s the most followed person on Instagram with 46.5 million followers and she boasts 63.5 million followers on Twitter.) They later became friends and collaborators, and she continues to tweet about new artists she loves, most recently 19-year-old R&B singer Alessia Cara.

“I think it’s amazing that she has an attitude that she can bring all these new artists who some I think are her competition,” said Nicholas Petricca, the Walk the Moon lead singer who performed his band’s massive hit “Shut up and Dance” with Swift on her tour.

“Like, if they succeed, she succeeds. We all succeed together,” he said.