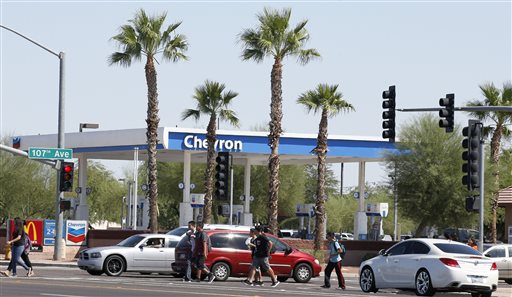 People walk by a gas station and convenience store hours after police surrounded the location near Interstate 10, detaining a person of interest and seizing the man's white Chevrolet Tahoe early on Friday, Sept. 11, 2015, raising hopes of a resolution to the rash of freeway shootings rattling the metro area in Phoenix. (AP Photo/Ross D. Franklin)

PHOENIX (AP) — Three teenagers were arrested Sunday for allegedly shooting at cars with a slingshot, but the incidents were not related to a recent string of Phoenix-area freeway shootings, authorities said.

Three men, all age 18, were in jail after admitting to flinging rocks at pedestrians and vehicles, Maricopa County Sheriff Joe Arpaio said.

Arpaio also told reporters Sunday that a couple whose car window was shattered Saturday east of Phoenix noted a license plate number of a vehicle that allegedly pulled up alongside them. Deputies and the state Department of Public Safety located the vehicle.

DPS Director Frank Milstead said the incidents are copycats and there was nothing linking them to any of the 11 incidents his agency has been investigating.

The agency also detained a 18-year-old man Friday for questioning in the shootings.

The shootings have left the city on edge for two weeks. Many Phoenix drivers have avoided freeways since the 11 confirmed shootings began Aug. 29, mostly along Interstate 10, a major route through the city. Eight of the cars were hit with bullets and three with projectiles that could have been BBs or pellets. One girl’s ear was cut by glass as a bullet shattered her window.

Police have been seeking tips, with freeway message boards across the city continuing to flash a tip-line number.

The shooting scenarios have varied. Some involved bullets fired at random cars, others involved projectiles and one was apparently road rage.

Longtime residents still remember a string of random shootings that terrorized Phoenix a decade ago. Nearly 30 people were shot then, and eight killed, including a cyclist who was riding down the street and a man who was sleeping at a bus stop. Two men were eventually caught and convicted.