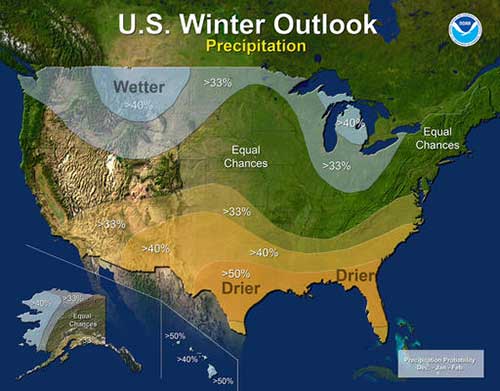 WASHINGTON (AP) — Federal forecasters say this winter will likely be warmer and drier than normal down south, and colder and wetter up north.

As for the nation’s middle belt, the winter should be typical, but one or two nasty storms or cold snaps could appear.

The forecast reflects the arrival of the global weather pattern known as La Nina.

California probably won’t get relief from its drought. National Weather Service drought expert David Miskus said California’s winter will likely stay dry and it will probably be “many, many years” before the drought is busted.

Private weather forecasters agreed the California wet season will come up short. But they see a harsher winter for the nation overall, including a return of the dreaded polar vortex, which funnels cold Arctic air into the U.S.