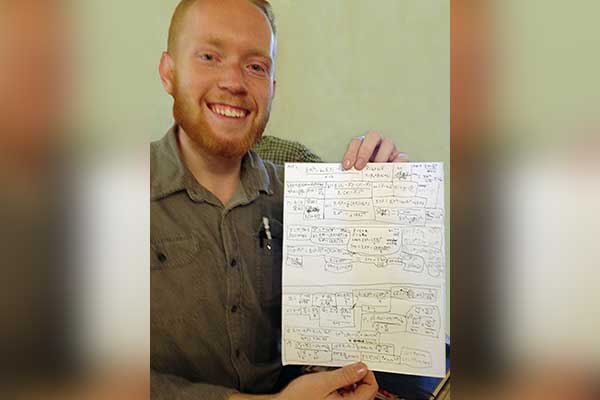 “I know it delayed getting the check to Hunter,” said Drobka, “but I didn’t want to just mail it to him; I wanted to make it special and see him again in person.” The two got together in Las Cruces on May 8 just before Winsor was set to take one of his final exams.

Winsor has had an amazing educational background since graduating from Eastern Arizona College in 2014. He completed many EAC classes while attending Thatcher High School. “I originally came to NMSU to pursue a Bachelor of Science (B.S.) degree in Soil Science,” said Winsor. But, to his surprise, NMSU officials were very impressed with Winsor’s existing credentials, which included over 200 credit hours at EAC. “They also mentioned the amount of time I had spent volunteering for the Bureau of Land Management (BLM) and Forest Service,” said Winsor. With his combination of EAC classes and hundreds of volunteer hours, he was told that he could skip a Master’s degree and go directly into a doctoral program!

Drobka, who has been presenting the scholarship each year to an outstanding high school senior who is an active member of St. Rose of Lima Catholic Church, decided to do something different this year. “I looked back through the 15 scholarships I had presented since my mother’s passing in 2003 and decided to honor one of the past recipients who had exceeded my expectations,” commented Drobka. She had lost track of some of the students but others have kept in touch with her. She selected Winsor based on the knowledge she had of his continuing accomplishments.

Over lunch, Winsor told her that one of his new skills was as an unmanned aerial systems (UAS) operator, flying drones to conduct field research. In fact, he is currently the only NMSU graduate student with Federal Aviation Administration accreditation and licensing as a drone operator.

His volunteer time with federal agencies and work with the Gila Watershed Partnership, as well as work with EAC’s Dave Henson gave Winsor skills with many types of scientific equipment and field machinery. He was so confident in his knowledge that he was able to correct graduate students in some of his classes who were utilizing tools incorrectly.

Winsor was invited to present some of his research at the National Cooperative Soil Survey conference in Rhode Island this June. In presenting the check to Winsor, Drobka suggested that he could utilize it for his expenses during that trip.

After returning from the conference, Winsor contacted Drobka stating that “The scholarship allowed me to stay at the hotel where all of the soil scientists were staying and I got to know quite a few of the state soil scientists over breakfast and dinner.”

“Networking is a critical part of education and lifelong learning,” said Drobka, “so this was the perfect use of the scholarship! My Mom knew that and would have been proud of Hunter.” And Winsor isn’t slowing down. His next presentation will be at the Soil Science Societies meeting in November.