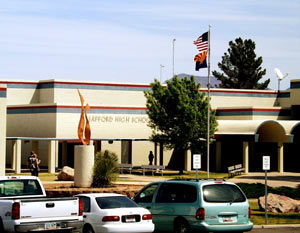 SAFFORD – On Monday, August 6th, authorities met with the Safford Unified School District maintenance supervisor, in reference to criminal damage that had occurred at the high school.

The supervisor informed police the school had surveillance footage of the incident. The footage showed a male, wearing a backpack and carrying a skateboard come into view on the south side of the high school near the office around 1:36 am. The male was wearing a dark shirt and pants and what appeared to be dark colored Converse style All Star tennis shoes. From the video it appeared that the male used his skateboard to hit the windows. Further footage showed the male walking around the north side to the east side of the school and then southbound on 14th Avenue.