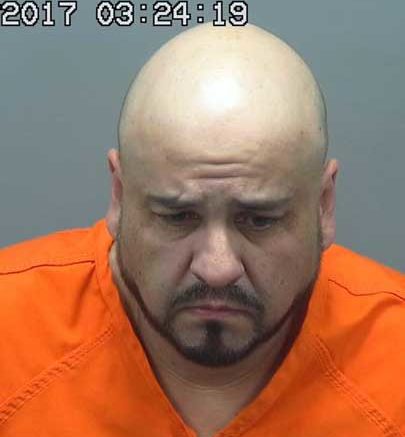 Contributed Photo/Courtesy GCSO: Alberto Coronado was arrested and booked into the Graham County Jail for theft after allegedly stealing nearly $2,200 in cash and goods from his employer, Walmart.

SAFFORD – The friendly Walmart door checkers in bright yellow smocks politely asking to see customers’ receipts signifies the start of the shoplifting season at the retail giant, but not all things stolen from the store are done so by customers.

Walmart night shift manager Alberto Coronado, 48, was arrested and booked into the Graham County Jail for theft on Friday. Coronado was caught while allegedly fleeing the county after stealing nearly $2,200 in cash and goods from the store in total from three separate occasions. Coronado was stopped by a deputy with the Cochise County Sheriff’s Office on a road near Willcox that led to Douglas.

A Safford officer was initially dispatched to Walmart at 755 S. 20th Ave. at about 9:32 p.m. after employees in the asset protection office reviewed video surveillance of Coronado allegedly stealing a Samsung Galaxy S8 cell phone and a $100 bill from a cash register earlier that morning. After the officer reviewed the footage, the employee said the store had surveillance video of Coronado doing the exact same thing on Nov. 11 and also stealing other items on one other occasion. Out of the three instances, the total amount stolen (including cash) was $2,179.82, according to the employee.

On top of the thefts, Coronado also left with the keys to the store, which the employee said would cost about $10,000 to re-key the entire store if the keys were not immediately returned. The employee advised Coronado left the store in his Jeep and that he may be headed to Douglas where he has family.

After not finding Coronado at his apartment in Thatcher, the officer issued an attempt to locate with probable cause to arrest to the Arizona Department of Public Safety and Cochise County Sheriff’s Office.

At about 11:30 p.m., Coronado was located by the deputy with the Cochise County Sheriff’s Office and was taken into custody.

The Safford officer drove to Willcox to retrieve Coronado and also recovered the Walmart store keys and a store radio.

After refusing to answer questions regarding the case, Coronado was booked into the jail on a single charge of theft.