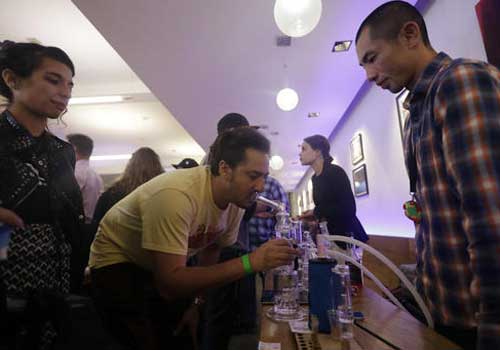 Voters in Florida, North Dakota and Arkansas passed medical marijuana measures, pushing the number of states with such laws past two dozen.

The California vote makes the use and sale of recreational cannabis legal along the entire West Coast and gives legalization advocates powerful momentum. Massachusetts is the first state east of the Mississippi to allow recreational use.

The victories could spark similar efforts in other states and put pressure on federal authorities to ease longstanding rules that classify marijuana as a dangerously addictive drug with no medical benefits.

California was the first state to approve medical marijuana two decades ago. It was among five states weighing whether to permit pot for adults for recreational purposes. The other states were Arizona, which defeated the idea, and Maine, where the question remained undecided early Wednesday.

In general, the proposals for recreational pot would treat cannabis similar to alcohol. Consumption would be limited to people 21 or older and forbidden in most public spaces. Pot would be highly regulated and heavily taxed, and some states would let people grow their own.

State-by-state polls showed most of the measures with a good chance of prevailing. But staunch opponents that included law enforcement groups and anti-drug crusaders urged the public to reject any changes. They complained that legalization would endanger children and open the door to creation of another huge industry that, like big tobacco, would be devoted to selling Americans an unhealthy drug.

“We are, of course, disappointed,” said Ken Corney, president of the California Police Chiefs Association. Corney said his organization plans to work with lawmakers to develop a driving-under-the-influence policy.

The California proposal sowed deep division among marijuana advocates and farmers. In Northern California’s famous Emerald Triangle, a region known for cultivating pot for decades, many small growers have longed for legitimacy but also fear being forced out of business by large corporate farms.

“I’m not necessarily stoked nor surprised,” said Humboldt County grower Graham Shaw, reflecting the ambivalence of the region to the measure. “I am very happy that the war on cannabis in California is finally over.”

If “yes” votes prevail across the country, about 75 million people accounting for more than 23 percent of the U.S. population would live in states where recreational pot is legal. The jurisdictions where that’s already the case — Alaska, Colorado, Oregon, Washington state and the District of Columbia — have about 18 million residents, or 5.6 percent of the population. Twenty-five states allow medical marijuana.

According to national polls, a solid majority of Americans support legalization.

Proposition 64 would allow people 21 and older to legally possess up to an ounce of weed and grow six marijuana plants at home. Varying tax rates would be levied on sales, with the money deposited into the state’s marijuana tax fund.

The exit poll of 2,282 California voters was conducted for AP and the television networks by Edison Research. This includes preliminary results from interviews conducted as voters left a random sample of 30 precincts statewide Tuesday, as well as 744 who voted early or absentee and were interviewed by landline or cellular telephone from Oct. 29 through Nov. 4. Results for the full sample were subject to sampling error of plus or minus 4 percentage points; it is higher for subgroups