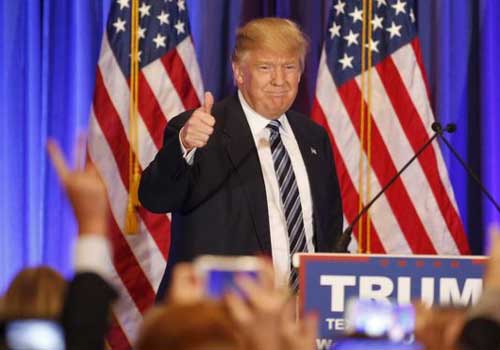 From Virginia coal country, as election results trickled in, Jimmy McDonald texted his boss to warn he might need a day off Wednesday. Celebrations, it seemed, were in order.

Just before midnight, he said he could barely believe it.

“The people have spoken,” he cheered. “The people said, ‘Enough is enough.'”

In a presidential contest that bitterly divided the nation, the election of Donald Trump to the White House left America’s voters just as polarized. For those watching as the results came in, there was exuberance, despair — and surprise on both sides of the political aisle.

McDonald was overjoyed. He’s vice president of collections at a bank in Tazewell, Virginia, where he spends his days working with neighbors who are losing cars, homes and businesses amid a collapsing coal economy. Trump is viewed a savior there, the man McDonald believes will deliver new prosperity to working class communities.

On the other side of the nation, Democrat Terry Zee Lee felt something far different.

“I fear for our country,” said the 68-year-old Lee, who earlier Tuesday had no doubt in her mind that Hillary Clinton would be elected president. “I cannot imagine that as well as our country is doing right now, with all the improvements and all the gains we’ve had for equal opportunity and social justice — it just makes me sick to my stomach that my fellow Americans have that much hate and misogyny.”

Election night turned into a nail-biter for millions of Americans as the nation waited for the final tally of votes from a small number of states, mostly in the upper Midwest. But Trump victories in Ohio, Florida, North Carolina and Pennsylvania, along with traditional Republican strongholds, gave the real estate mogul the path he needed to win.

The final determination of who would become the nation’s 45th president extended an already long, acrimonious race.

In Hagerstown, Maryland, Sebiina Odin, an African-American who supported Clinton, wondered about the prospects of the nation coming back together after such a rancorous campaign. She joked that her son asked her, “‘You want to go to Canada for four years?'”

But Odin said that on Wednesday, “I’m going to get up and go to work. And I’m just going to be like, he’s in the White House. And hopefully, four years from now, we’ll win it back. ”

Even as Democrats sought to make sense of the outcome, Republicans pointed to Trump’s outsider status as part of his unorthodox appeal.

Josetta Smith, a 38-year-old Tazewell, Virginia, resident who’d never even registered to vote before this year, was so wowed by Trump that when she renewed her license plate, she got a personalized tag — “GO-TRMP” — as a show of support.

“He’s not a politician. But that’s awesome because he always speaks whatever he thinks,” said Smith, who’s unemployed. “He’s completely determined to have his way, which is good and bad. Whatever he says he wants to make happen, he’s going to make happen.”

“I think people are just tired of these people in Washington thinking we work for them, when they work for us,” he said.

Fusaro stayed up late watching the results come in — feeling, like much of America, stunned.

“When this first started, I didn’t think Trump would get this far, and I’m kind of a little bit in shock. But I’m very relieved. He’s had no support from the Republican establishment, or very little support. He had a lot of negative media. And despite all that, he’s done very well. That’s just a testament to the man’s will and ability.”

Fusaro had no illusions, however, about what it might take to begin healing the fractured electorate.

Trump, he said, must appeal for unity.

“I think he just needs to get out there and let them know that he’s not the monster that he’s been made out to be, and he will work for every American,” Fusaro said. “And hopefully they’ll begin to trust him once he gets in office. That’s what I’m hoping for anyway.”

Claire Galofaro in Tazewell, Virginia, Matt Sedensky in Atlanta, Peter Banda in Denver and Pauline Arrillaga in Phoenix contributed to this report.